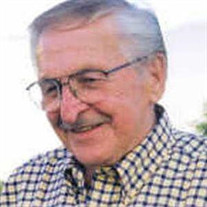 William (Bill) M. Smith passed away at the age of 95 years 2 months and 5 days at Share Medical Center Alva, Oklahoma. William McKinley (�Bill�) Smith was born on September 3, 1922 on a cotton and peanut farm in Old Tarrant, Texas, to Elgie Lou (McManus) Smith and William McKinley Smith. Bill left home at age 16 to finish school in nearby Sulphur Springs, Texas. He worked at A&P Groceries and drove a milk truck to pick up milk at the local dairy farms and deliver the milk to Carnation Milk Plant. October 15, 1942 Bill joined the United States Army Air Corps, which later became the United States Air Force. Bill was a decorated Corporal who served as a Radio Operator on Bombers in the Headquarters Squadron of the 20th Air Force in the Asiatic Pacific Theater. Bill became a life long Oklahoman after the war and moved to Alva, Oklahoma to attend Northwestern Oklahoma State University, where he met the love of his life, Eula Jean Wenzel. They were married on July 7, 1949 in Fort Worth, Texas. Of their union of marriage they had four children. Randy Bill, Debra Denise, Robin Troy and Ginger Rhea. Bill also had a daughter Karan Gross, from a previous marriage before the war. Bill and Jean lived in Texas, Nebraska and Tulsa then settled in Oklahoma City where they raised their family. Bill worked for various grocers including Crescent Market in Oklahoma City, and spent many years in the Convenience Store Business. Bill worked for H.J. Heinz Co. for 13 years. Bill and Jean moved back to Alva, Oklahoma in 1985 where they owned and operated the Trading Post. Bill started B&B Super Lube and U-Haul with his friend Bill Hackney where he actively operated the business until he retired July of 2017. He had a great sense of humor, laughed often, loved Alva and NWOSU Athletics, hunting, fishing and loved hearing bad jokes. He loved his family, his work, and his Country. He was very patient, meticulous and proud. Bill never complained, and if you asked him �how are you doing?� his reply would always be �doing great.� He adapted to change and embraced the day. He would always stay up to date on technology, recently learning the newest smart phone. Bill enjoyed serving as Officer and Commander on a State and Local level with the VFW Black Wing Post # 2847 in Alva. He was instrumental in creating and maintaining the new baseball field used for the Little League World Series Champions, the Alva Cardinals in Alva, Oklahoma. Preceding him in death were his loving wife of 64 years Jean, his parents, one brother Mynard Smith, four brother-in-laws: Joe Shell, Arnis Payne, Roscoe Bagenstos, and Ray Boatman, one sister-in-law Wanda Bagenstos-Boatman and two nieces Gayle Owl, and Kay Baker. He is survived by his five children: two sons Randy and wife Mitzi Smith of Edmond, Oklahoma, Robin and wife Loretta Smith of Colorado Springs, Co. Three daughters: Debra and husband Ron Hipp of Keller, Tx, Ginger Smith of Alva, Oklahoma and Karan Gross of Huntsville, Alabama. A sister, Essie Shell, Sister-in-law Rose Jean Smith. PaPa had three grandchildren, Jed Smith, Caleb Smith both of Alva, Oklahoma, and Madison Smith of Edmond, Oklahoma. The family wishes to express their debt of Gratitude to U-Haul who continued to appreciate a 95 year old businessman and tried to talk him out of retiring at 95. Also, a heartfelt thank you to the Doctors and Staff at the MD Anderson Cancer Center, for giving his family five more years with their loved one. We know Bill would like for you to feel free to wear your Ranger gear, so you can go directly to the game after the services. In Lieu of flowers, Memorial Contributions may be made to a Cancer Organization of your choice.

The family of William (Bill) M. Smith created this Life Tributes page to make it easy to share your memories.