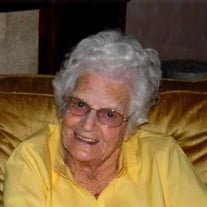 Wilhelmine Gail (Murrow), the seventh child of Mary Alice (Davison) and Caleb Tip Murrow, was born in Walnut Grove Community east of Waynoka on June 24, 1917 and passed from this life on January 20, 2017 at the age of 99 years, 6 months, and 27 days. At the age of 18 months, her family moved to the Cora community, where she grew up and attended Mt. Vernon School. Wilhelmine graduated from the 8th grade in seven years and was the teacher’s helper listening to the younger students read. She attended Cora Church and was baptized in Barney Creek by Ted McWilliams. On December 19, 1932 Wilhelmine was united in marriage to Ernest Franklin Gum in Alva. To this union two children were born. Following their marriage they operated the Setmore Store west of Alva for two years. In 1939, Wilhelmine became a farm wife working along side Ernest until 1970 when they moved to Alva and continued farming until 1971. She enjoyed flowers of all kinds, crafts, sewing and cooking favorite meals for her grandchildren. During WW II, Wilhelmine took Red Cross training, where she was active in the Women’s Missionary Society and rolled bandages made from strips of torn sheets. Wilhelmine was a 50 year member of the United Neighbors Club. She was a member of the Alva Church of the Nazarene where she taught the 4 and 5 year old Sunday School Class. She was over the church kitchen for several years and enjoyed helping with Bible School. She was also very active in Golden Agers. In 2007, Wilhelmine made her home at Beadles Nursing Home and participated in most of the activities. In 2009 she was honored to wear the Crown of Luau Queen. Wilhelmine was preceded in death by her parents, her husband, a grandson Timothy Utterback, and three great-grandchildren. She is survived by her daughter and husband, Maxine & Bill Utterback of Alva, son and wife Garold and Lois Gum, Oklahoma City. Also grandchildren; Gail (Lonnie) Bliss, Caleb and Douglas (Tonya) Gum, Frank (Darla), Danny and James Utterback and Darla Coulter; 18 great-grandchildren and 12 great-great-grandchildren as well as many other relatives and friends. Contributions may be made in lieu of flowers to the Alva Church of the Nazarene.

Wilhelmine Gail (Murrow), the seventh child of Mary Alice (Davison) and Caleb Tip Murrow, was born in Walnut Grove Community east of Waynoka on June 24, 1917 and passed from this life on January 20, 2017 at the age of 99 years, 6 months, and... View Obituary & Service Information

The family of Wilhelmine Gail Gum created this Life Tributes page to make it easy to share your memories.

Send flowers to the Gum family.