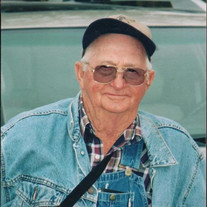 Born to Katie E (McBeth) and Chris F. Haas on the family farm north of Medicine Lodge, Ks. On July 9, 1925 and passed away on Jan. 4, 2017 at Alva, OK. at the age of 91 yrs. 5 mos. and 25 days. He lived most of his life in Barber Co. KS. And attended school at Amber, the country school near the family farm, and at Sharon, KS. where the family later moved. Chuck had one brother, Lee, and four sisters, Gertrude, Louise, Mary Jane and Annabel. He served in the U.S. Navy during WW II. Upon his return home he worked on a harvesting crew, and as a section hand for the railroad. He married Velma May Shelite in 1950. Together they raised one daughter, Jimmy Alice Jacobson. They were married 61 yrs. In 1954 Chuck returned to the work he loved, raising cattle and farming for the Coss-Mease Farm, and in later years the Haas Farm. He �adopted� the Mease boys, Don and Robert, as his own until he passed from this life. He had three grandsons, Ricke M. Seal, Bryan C. Jacobson, and Jason R. Jacobson, who he loved and embraced every opportunity to spend time with. He also loved his great grandchildren: Jakeb Jacobson, Shenille (Dakota) Bendickson, Emily Seal, Virginia Seal and Rayden Jacobson, and two great-great grands, Gavin and Gracelyn Jacobson. Also his son-in-law Randy Fox and family; Norweta, Skylee, Rosalyn, and Brantlee Fox. He also leaves behind two sisters, Mary Jane Catlin and Annabell Shelite, and many wonderful nieces and nephews, and friends. A memorial service will be held Jan. 21, 2017 at Wharton Funeral Chapel at 2:00 PM with Max Ridgeway officiating. Graveside Services are Private Contributions may be made to the American Legion Lorraine Post 98 in Isabel, Ks, 201 N. Main St, 67065

The family of Wilbur Haas created this Life Tributes page to make it easy to share your memories.

Born to Katie E (McBeth) and Chris F. Haas on the family farm...

Send flowers to the Haas family.