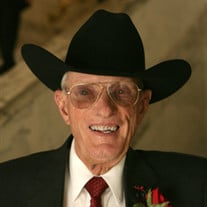 Wayne Allen, son of Marion Lela (Peters) and Oliver A. Leamon was born on April 15, 1928, in Oklahoma City. He passed away at his home in Dacoma, Oklahoma, on May 19, 2013, at the age of 85 Years, 1 Month and 4 Days. Wayne attended school in Wichita, Kansas; and Lambert, Oklahoma; before graduating from Dacoma High School in 1945. He was an outstanding baseball and basketball player in high school at Lambert and Dacoma. After high school, he attended Northwestern State College. On September 3, 1948, in Dacoma, Wayne was married to Wanda Jean Whittet. To their marriage there were three daughters; Connie, Cathy and Christa. Following their marriage they made their home in Dacoma where he farmed and ran cattle. Wayne served on the boards of the Dacoma Farmers Cooperative and the Federal Land Bank of Western Oklahoma. In recent years, he enjoyed driving around with his Border Collie, Dally, to check on his cattle, wheat and oil wells. Wayne was an avid golfer and a member of the Alva Golf and Country Club, Alva Elks Lodge, Alva Moose Lodge and Masonic Lodge. He was preceded in death by his wife, Jeanie, and his parents. Wayne is survived by three daughters and their husbands: Connie and Mike Mitchel of Woodward, Cathy and Steve Hickman of Cherokee, and Christa and Dean Hughes of Carmen. Grandchildren and Great-Grandchildren Rep. Jeffrey and Jana Hickman, Taylor, Ashley and Austin; Mikela and Mark Williams and Kaden; Jeremy and Megan Hickman and Holly; Jay and Micol Mitchel and London; Andrea and Jay Lohmann, Jordan, Jagger and Adley; Aaron and Dana Hughes, Drake and Aubree; and Jared and Haley Mitchel; as well as numerous nephews, nieces, other relatives and friends. PDF Printable Version

The family of Wayne Allen Leamon created this Life Tributes page to make it easy to share your memories.