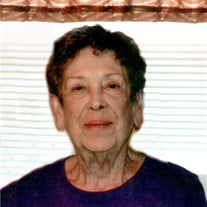 Funeral Services: Alva First Christian Church (Disciples of Christ) Monday, December 21, 2015 2:00 P.M. Private Interment at a later date Violet Jean, daughter of Della (Woods) and Silas Thompson was born on August 11, 1935 in Wilson, Oklahoma. She passed away on 18TH of December 2015 in Enid Oklahoma, at the age of 80 years, 4 months and 7 days. She graduated Wilson High School with the Class of 1953. After graduation she worked for the phone company as a telephone operator in Ardmore, OK. On September 1, 1957 she was married to Richard Charles Herridge in Wilson, Oklahoma. To their marriage three daughters, Melissa, Teresa and Diane were born. Following their marriage they lived in Anthony, Kansas where she was a stay-at-home mother. In 1968 the family moved to Alva, Oklahoma and Violet started working for Central National Bank as a bookkeeper. Retiring after 30 years. Violet was a member of the Alva First Christian Church (Disciples of Christ). Mrs. Herridge was preceded in death by her daughter, Melissa on October 31, 1991 and Richard on September 25, 2006. A sister, June and four brothers, Bill, Onis, Travis and Maynard. Violet is survived by two - daughters Teresa Kennedy of Ardmore and Diane and Husband Jamey Penner of Alva. Three grandsons, Ryan and wife, Shayla Penner and Trent Penner & Fiancé, Heather Fox and Cade Kennedy. Two granddaughters, Kelsey and Kaci Kennedy and a great grandson Michael James Penner. Two brothers Buck and Carson several nieces, nephews, other relatives and friends.

The family of Violet Jean Herridge created this Life Tributes page to make it easy to share your memories.

Send flowers to the Herridge family.