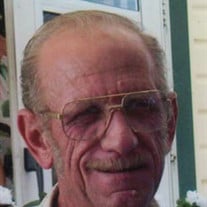 Verland Lee, son of Della Genevieve (Statser) and Joseph Cecil Rice was born January 27, 1950 in Tulia, Texas. He passed away suddenly on November 18, 2010 at the age of 60 years, 9 months and 22 days. He attended school in Quitaque, Texas. He joined the United States Army where he received his GED and served in the Vietnam War. He received several accommodations including: The Purple Heart, Bronze Star Medal, Gallantry Cross, Bronze Service Star, Good Conduct Medal and a Vietnam Civil Actions Honor Medal. Verland was Honorably Discharged on September 8, 1971. Following his discharge he worked for Chevrolet Motor Company as a mechanic in Tulia, Texas, then as a welder in Lubbock, Texas. On August 29, 1975 he was married to Priscilla A. Morgan in Sundown, Texas. Together they raised three children; Melissa, Amanda and Jerry. Verland worked for Chevron until he retired in 1992. In 1992 they moved to Brownwood, Texas where he worked for Comanche Pottery for 3 years; for McCoys for 2 years ; he was the store manager for McDonalds for 5 years. In 2002 they moved to Cherokee, Oklahoma to make their home and he worked for R.L. Wilson for 3 years before going to work for Pendpac out of Fairview, Oklahoma. Mr. Rice is preceded in death by his mother on December 7, 1967, his father on November 23, 1987 and his brother Reverend Renay Rice on January 25, 2004. Verland is survived by his wife, Priscilla of Cherokee, two daughters, Melissa and her husband Greg Schwerdtfeger of Capron and Amanda Statser of Robstown, Texas, a son, Jerry and his wife Kim O’Briant of May, Texas. Nine Grandchildren; LaRisha, Katrina, Terry, Jeremy, Mathew, Meghan, Kylie, John and Richard and eleven great grandchildren. A brother Zeldon Rice and his wife Trudy Rice of Lawton, Oklahoma, one aunt Virginia and Uncle Randall Hutson, two uncles; Uncle James and Jeanette Statser and Uncle Billy and Karon Statser all of California. PDF Printable Version

Verland Lee, son of Della Genevieve (Statser) and Joseph Cecil Rice was born January 27, 1950 in Tulia, Texas. He passed away suddenly on November 18, 2010 at the age of 60 years, 9 months and 22 days. He attended school in Quitaque, Texas.... View Obituary & Service Information

The family of Verland Rice created this Life Tributes page to make it easy to share your memories.

Send flowers to the Rice family.