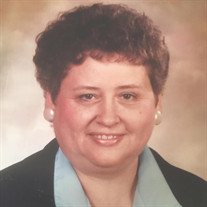 Verina Omey, daughter of Francis (Smith) and Reuben Koehn was born on October 4, 1941 in Cimarron, KS. She passed away at her ranch on October 28, 2020, with her loving family in attendance, at the age of 79 years and 14 days. She attended school in Cimarron, KS and also helped her parents in a restaurant there. She met the love of her life, Jim Omey, there in high school. They were married at Freedom, OK on December 18, 1958 with Jim’s grandparents, Doc and Bertha Omey as witnesses. Following their marriage they lived at Kalvesta, KS where Jim worked for his parents and Verina stayed home. Soon their daughter Shelly was born. After a short while they moved to the Omey ranch north of Freedom, OK, where they made their home for the rest of their lives. Their second daughter Patricia arrived in 1964, and their last daughter Debbie in 1967. Verina was a dedicated wife and mother. Verina was a member of the Freedom Christian Church where she served as a Deaconess and attended many Bible studies. She enjoyed singing and blessed many with her beautiful voice in song and praise. Verina worked alongside her husband Jim on the ranch, feeding cattle, building fences, mowing and yard work along with cooking and cleaning. She also enjoyed teaching her granddaughters how to cook and keep house. She was preceded in death by her parents; her husband, Jim; a son-in-law Brette J. Province; and an infant grandson, Kristopher Province. Verina is survived by her three daughters, Shelly Province and Patricia Omey, both of Freedom, and Debbie and husband Clint Harzman of Alva; Seven grandchildren, Kirt and wife, Amy Province, of Woodward, OK, Kaylyn and husband, Brandy Shumate, of Minneola, KS, Jenny and husband, Dakota Province, of Freedom, OK, Will Jessup of Alva, OK, Kelsey and husband Mike Bryant, of Enid, OK, Clansy Harzman and fiancé Patricia Beeler, of Edmond, OK and Ethan Harzman of Alva, OK; Seven great-grandchildren, Autry, Brody and JoLee Province, Michael Penner, Cambri Bryant, Macey and Chasen Bryant; Four brothers and a sister, Richard and DeeAnn Koehn of Concordia, KS, Wes and Carol Koehn of Dodge City, KS, Marty and Sherri Koehn of Boone, IA and Connie Scott of Virginia Beach, VA; A sister-in-law Rita Cohoon of Kalvesta, KS; a number of nieces and nephews and other relatives and friends. Memorial contributions in her memory may be made to the Freedom Volunteer Ambulance Service through Wharton Funeral Chapel.

Verina Omey, daughter of Francis (Smith) and Reuben Koehn was born on October 4, 1941 in Cimarron, KS. She passed away at her ranch on October 28, 2020, with her loving family in attendance, at the age of 79 years and 14 days. She attended... View Obituary & Service Information

The family of Verina Omey created this Life Tributes page to make it easy to share your memories.

Verina Omey, daughter of Francis (Smith) and Reuben Koehn was...

Send flowers to the Omey family.