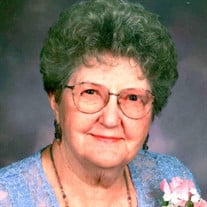 Verda Elizabeth, daughter of Leah Elizabeth (Rodgers) and Andrew Jackson Holt was born October 21, 1927 in Carmen, Oklahoma. She passed away at the Beadles Nursing Home on the 11th day of March at the age of 94 years, 5 months and days. She attended the Alva School System where she graduated from High School and attended the Northwestern Oklahoma College for Cosmetology where she received her Cosmetology License. On July 4, 1948 she was married to Robert Wayne Smith in Alva, Oklahoma. To their marriage Craig, Kurt, Keith, and Kyle were born. On October 4, 2001 she was Married to Wendell Dean Murrow. She and Bob owned and operated the Ranger café, she worked as a telephone operator for Southwestern Bell Telephone Co. The Old number 9 board, and was a clerk at Holder Drug. She was a member of the VFW Women’s Auxiliary and the Barnes Street Church of Christ. Verda was preceded in death by her husband Dean, two brothers Clifford and Alfred; six sisters Ethel, Velma, Hazel, Delphina, Leola and Freda, two sons Kurt and Keith, and a grandson Josh. Verda is survived by her sons, Craig and his wife, Ruby Smith of Reed Springs, MO; Kyle Smith of Alva, OK; grandchildren, Dustin and his wife, Lisa Smith of Peyton, CO, Shannon and her husband, Chris Morris of Alva, OK, Jeremy Fiscus of Wichita, KS, Nathan Smith of Bozeman, MT, Elizabeth Smith of Bozeman, MT, Jolie and her husband Drew Kisner of Oklahoma City, OK; great grandchildren, Aaron and Renee Smith of Peyton, CO, Mackenzie and Mitchell Morris of Alva, OK, Logan, Micah and Hunter Fiscus of Wichita, KS, Kaleb and Landon Smith of Wichita, KS, Andrew Boyd-Smith of Bozeman, MT, Madison and Everett Owens of Bozeman, MT, and Penelope Kisner of Oklahoma City, OK; several nieces, nephews, other relatives and friends. Memorial contributions to Beadles Nursing Home Activity Fund through Wharton Funeral Chapel

Verda Elizabeth, daughter of Leah Elizabeth (Rodgers) and Andrew Jackson Holt was born October 21, 1927 in Carmen, Oklahoma. She passed away at the Beadles Nursing Home on the 11th day of March at the age of 94 years, 5 months and days. She... View Obituary & Service Information

The family of Verda Elizabeth Smith-Murrow created this Life Tributes page to make it easy to share your memories.

Send flowers to the Smith-Murrow family.