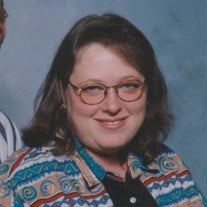 Tressa Fay, daughter of Betty Fay (Reid) and Robert (Bob) Lee was born on October 23, 1969 in Haxtun, CO, she passed away in Oklahoma City on May 19, 2020 after a brief illness at the age of 50 years, 6 months and 28 days. She started school in Capron Oklahoma and transferred to Burlington in 1976. She graduated from Burlington High School in 1987. She attended college at both Northern and Northwestern Oklahoma State Universities. She also attended Northwest Technology Center at Alva. During her adult working career she worked at the Rope Factory in Kiowa, at Enid State School and at Alva; Beadles Nursing Home, VAP Productions and Walmart. On May 8, 1999 she married the love of her life, Karl (Monty) Dirham in an outdoor wedding north of Capron. With this union came a blended family, Wyatt T. Lee, Karl Dirham 3rd and Brianna Parmer. She had 7 grandchildren and a special little “grandson” Michael Hawkins. Tressa entertained herself with word searches, Candy Crush, Color by numbers and other games. Her T.V. time was westerns, Hallmark Christmas shows, and she enjoyed a great police drama. Everyone around her knew she loved the color green. Tressa is survived by husband Karl (Monty) and son Wyatt of the home in Alva. Siblings Rockey (Diana) Lee, Anita Tingler (Jo Sandoval), Angie (Don) Kirkley, Karen (Mike) Outhier of Enid, OK. Shelley (Larry) Clark of Woodward, OK. Jeff (Danette) Lee of Ringwood, OK. Karol (Carl) Parsons, Roger (Alice) Putnam and Donald (Julia) Lee all of Alva. Her sister-in-law’s: Susan Yonemmura, Hawaii, Dory (Rex) Reader, Montana, Dee Rucker of Alva, OK and Tana Dirham of Enid, OK. Multiple nieces, nephews and many other family and friends. She was preceded in death by her parents, brother in laws Vernon, Harry and Andy. Step daughter Kayla Dirham, Sister Rena Maddux, nephews Michael Lee and Aaron Lee Connell. In lieu of flowers, Memorial Contributions may be made in her memory to Diabetes Association through Wharton Funeral home.

Tressa Fay, daughter of Betty Fay (Reid) and Robert (Bob) Lee was born on October 23, 1969 in Haxtun, CO, she passed away in Oklahoma City on May 19, 2020 after a brief illness at the age of 50 years, 6 months and 28 days. She started school... View Obituary & Service Information

The family of Tressa Dirham created this Life Tributes page to make it easy to share your memories.

Send flowers to the Dirham family.