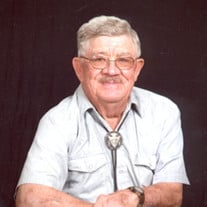 Theodore William Pshigoda was born July 01, 1935 in Shattuck, Oklahoma to John and Mary Shaffer Pshigoda and passed away on Sunday, January 11, 2015 at the age of 79 to be with his Lord and Savior. Ted grew up on a farm north of Alva and attended the Alva Public Schools. He joined the United States Army in 1955 and served until 1963. During this time, he was stationed in Germany for two years. After his service in the army, Ted returned to Alva and worked as a custom wheat cutter hand for his mother, Mary, and stepdad, Clarence Ginder. He also worked for the Leslie’s and many others. Ted met the love of his life and married Marie Leatherman Hansen on October 5, 1972 in York, N.C. They settled in Cherokee, Oklahoma, and were married for 40 years until Marie’s death on May 14, 2013. Ted worked for Caruthers Construction for several years and the City of Cherokee. From August 2009, until the present, he worked for the Alva Review Courier and Newsgram, where he rolled papers at night and delivered to Cherokee and the surrounding towns of Freedom and Waynoka. Ted developed many friendships delivering the papers. Ted was known to share whatever he had. He would cook up batches of homemade soup and other dishes and deliver them to several people in his home town. Ted will be missed by many, as he was always the life of a party, workplace, or family gathering. Both Ted and Marie were members of the First Christian Church in Cherokee. Ted was preceded in death by his parents, John Pshigoda, Mary Pshigoda Ginder and stepdad, Clarence Ginder, his loving wife, Marie, a sister, Esther Colborn Balding, and a brother, Danial Pshigoda. Those he left behind are sisters, Frieda Meyer Graves of Alva, Ofilia Cleveland of Stockton, California, Mary Driskill Smith of Edmond, OK, a brother, Marvin Pshigoda of Alva, and a brother-in-law Doug Balding of Lake City, Kansas, many nieces, nephews, and cousins that he loved and adopted, three step-children, James(Kristina) Hansen of Castle Rock, Colorado, Lois (Gene) Lyon of Bethany, Oklahoma, and Steve (Violet) Hansen of Alva, other family and friends. PDF Printable Version

Theodore William Pshigoda was born July 01, 1935 in Shattuck, Oklahoma to John and Mary Shaffer Pshigoda and passed away on Sunday, January 11, 2015 at the age of 79 to be with his Lord and Savior. Ted grew up on a farm north of Alva and attended... View Obituary & Service Information

The family of Theodore "Ted" Pshigoda created this Life Tributes page to make it easy to share your memories.