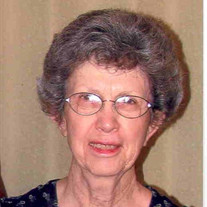 Shirley Ann, daughter of Grover Floyd and Vivian (Parker) McArthur, was born December 31, 1931 at the Masonic Hospital in Cherokee, Oklahoma. She passed away March 30, 2019 in Bowie, Maryland at the age of 87 years, 2 months, and 30 days. Shirley grew up on a farm one mile southeast of Capron. She attended school in Capron through the 6th grade. In 1943 her family moved to Alva and she attended Washington School. She graduated from Alva High School with the class of 1949. Shirley attended Northwestern from 1949-1951. She transferred to Friends University where she graduated in 195e with a Bachelor’s Degree in Education. In 1952 Shirley married Oscar Hudson Cummings, from Warthen, Georgia, at her parents’ home. In 1953 she taught school in Winfield, Kansas while Hudson was in the service in Germany. When he returned home, they moved to Wichita, Kansas and Shirley taught school there. In 1961, their son, John Franklin was born and Sally Ann arrived in 1963. The family moved to Alva, Oklahoma in 1963 to farm. Shirley and Hudson farmed until their retirement in 1998. Shirley was a life long member of the Alva Friends Church. She took great joy in teaching Sunday school and Friends Youth. She also played the organ for many years. She is preceded in death by her parents, Grover and Vivian and her husband, Hudson. Shirley is survived by her son, John and his wife Ramona; her daughter, Ann, and her husband Daniel Bennett; and her most beloved grand daughter, Connor Rylie Cummings. She is also survived by her nieces, nephews, other relatives and friends. Memorial Contributions may be made in her memory to Alva Friends Church, Alzheimer’s Association, St. Jude’s or Care.

Shirley Ann, daughter of Grover Floyd and Vivian (Parker) McArthur, was born December 31, 1931 at the Masonic Hospital in Cherokee, Oklahoma. She passed away March 30, 2019 in Bowie, Maryland at the age of 87 years, 2 months, and 30 days. Shirley... View Obituary & Service Information

The family of Shirley Cummings created this Life Tributes page to make it easy to share your memories.

Send flowers to the Cummings family.