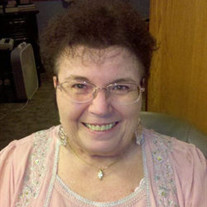 Shirley Ann, daughter of Genevieve (Toelle) and Edward Barrett was born December 4, 1943 in Fredrick, Oklahoma. She passed away at St. Francis Hospital in Wichita, Kansas on the 27th of May at the age of 68 years, 5 months and 23 days. She attended the Alva School System and graduated with the class of 1961. She attended Northwestern Oklahoma State University where she received a Bachelors of Science Degree. In 1966 she graduated from St. Francis Hospital School of Medical Technology. Shirley went on to receive more training and became a Specialist in Hematology. On November 29, 1968 she was married to Ron Whisman in Alva, Oklahoma. To their marriage a daughter, Shannon was born. Following their marriage they made their home in Wichita, Kansas where she worked at St. Francis Hospital for 30 years. Shirley was the top of her field; she gave many lectures and taught hematology and phlebotomy. She loved to read, collect pitchers, spend time with family and friends and playing or just loving on her service dog Sassy. Shirley overcame many obstacles in her life including polio, post polio and many medical problems. She was a fighter against all odds. She was another one of God's miracles. Mrs. Whisman is preceded in death by her parents; a brother Edward Barrett Jr.; two brothers-in-law, Bob Whisman and Brett Province and a sister-in-law Margaret Province. Shirley is survived by her loving husband, Ronald; her daughter Shannon; her service dog Sassy; two sisters and their husbands, Yvonne and Larry Stearns and Caroline and Chuck Snyder; two brothers, Randy and George; two brothers-in-law, Leroy Province, Les Whisman and his wife Barbara; three sisters-in-law Rose Mary Barrett, Diana Whisman and Shelley Province. She is also survived by a very special friend, Bonnie McDonald Coffey and her husband Doyle; a host of nieces, nephews, other relatives and friends. The family would like to extend a special thank you to DeeDee and Debbie for their loving and devoted care of Shirley over the past year. PDF Printable Version

Shirley Ann, daughter of Genevieve (Toelle) and Edward Barrett was born December 4, 1943 in Fredrick, Oklahoma. She passed away at St. Francis Hospital in Wichita, Kansas on the 27th of May at the age of 68 years, 5 months and 23 days. She... View Obituary & Service Information

The family of Shirley Ann Barrett Whisman created this Life Tributes page to make it easy to share your memories.