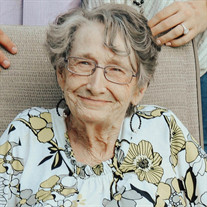 Sherrill Preston, daughter of Alfred and Frances Edwards, was born August 30, 1936 in Odessa, Texas. She passed away December 25, 2019 at St. Mary’s Hospital in Enid, Oklahoma at the age of 83. She was the oldest of two children. Sherry attended Wink High School and graduated in 1953 and then attended North Texas College, majoring in Education in 1957. On March 27, 1964, Sherrill (Sherry) Edwards married Cecil Preston in the Methodist Church in Laverne. They moved and taught school in several different places in Oklahoma and Texas before returning to Laverne. After settling in Laverne they welcomed a daughter, Kathleen (Kate) Preston Nickel. They farmed, raised sheep and Sherry was a homemaker. After Kathleen graduated, they traveled, living in Texas, Arizona and finally settling in Alva. She was a member of the First United Methodist Church. Sherry lived in Beadles Nursing home for 6 years and loving doing crafts, playing bingo and participating in all events. She especially loved her dear friends and the staff at Beadles. She adored her grandkids and you could always catch her bragging about them. She also enjoyed watching them show their animals and play sports. Sherry was preceded in death by her husband Cecil and her parents Alfred and Frances Edwards. She is survived by one daughter Kathleen Nickel and her husband Lynn, four grandchildren, Kolby, Kory and wife Katie, and Karlee Dietz of Alva; one sister Dana and husband Addis Hargrove of Arlington, Texas; one sister-in-law Patricia (Patti) Gardner and her husband Leon of Canute, Oklahoma; several nieces, nephews, other relatives and friends. In lieu of flowers, contributions may be made in her honor to Beadles Nursing Home Activity Fund

Sherrill Preston, daughter of Alfred and Frances Edwards, was born August 30, 1936 in Odessa, Texas. She passed away December 25, 2019 at St. Mary&#8217;s Hospital in Enid, Oklahoma at the age of 83. She was the oldest of two children. Sherry... View Obituary & Service Information

The family of Sherrill Preston created this Life Tributes page to make it easy to share your memories.

Sherrill Preston, daughter of Alfred and Frances Edwards, was...

Send flowers to the Preston family.