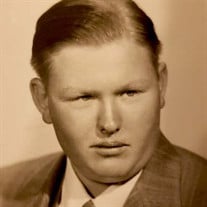 Samuel Dean, son of Goldie E. (Terrill) and John C. Stewart, was born December 31, 1932 on a farm North of Freedom, Oklahoma. He passed away at his home on December 8, 2020 at the age of 87 years, 11 months and 8 days. Growing up Sam attended Old Freedom through the 6th grade, going on to Freedom High School and graduating in 1950. As a young boy he helped with chores on the farm. He was drafted by the United States Army in 1953 and served in the Korean War, he did two tours in Vietnam and retired from the Army in Germany after 20 years of service to our country. He was married in 1964 to Adele A. Fischer in Vienna Austria to this union one child was born Therese. After the death of his wife he moved to Alva to make his home. He is preceded in death by his wife, Adele, parents, John and Goldie; three brothers, John E., George and Simon Leroy (his twin); four half brothers, Billy, Theodore, David and Fred. Samuel is survived by his daughter Therese of Alva, a grandson Kamran Khan and Sarah Jones, two great-children Emma Khan-Jones and Kailler Khan-Jones. A sister Mary and husband Francis Melkus of Amarillo, Texas. Several nieces and nephews and their spouses: Tracy and Tammy Stewart, Debra and Ron James, Donita and Mark Hohensee, Jeffery and Hilda Melkus, Clint and April Stewart, Michael Melkus, Linda and Wes Lavicky and Carol and Joe Johnson. He is also survived by several great nieces and nephews: Melissa Jo and Chris Colvin, Kayla and husband Michael Gordon, David Stewart, Lisa and John Diacon, Paige and Ben James, Kortnee and husband Eric Ranco, Jeffery A., Rebekah and Noah Melkus, Joe and Ky Pierce, Jason Pierce, J.C. and Shawna Stewart, Stormy and Michael Rosenberger, Tiffany Stewart, Angela and Keith Bell, Shawna and Nathan Applegate; great great nieces and nephews, Paitan and Angelien, Vance Stewart, Cort Whitaker, Cody Moore, Leah Rosenberger, Tyler Pierce, Allison Applegate, Sarah and John Diacon, Kyla, Chandler and Landon Colvin. Other relatives and friends Memorial contributions may be made to the Alva Bible Baptist Church

Samuel Dean, son of Goldie E. (Terrill) and John C. Stewart, was born December 31, 1932 on a farm North of Freedom, Oklahoma. He passed away at his home on December 8, 2020 at the age of 87 years, 11 months and 8 days. Growing up Sam attended... View Obituary & Service Information

The family of Samuel Stewart created this Life Tributes page to make it easy to share your memories.

Send flowers to the Stewart family.