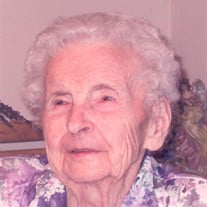 View the image gallery -- View a Video -- 10-033 Davison Ruth, Daughter of J.S. and Minnie May (Cole) Jones was born on November 1, 1909 in Alva, Oklahoma. She passed away June 28, 2010 at the age of 100 years, 7 months and 27 days. Ruth attended Alva public schools while living with her grandmother, Maxline Jones. On April 7, 1924 she was united n marriage to Frank Davison. Following their marriage they lived on the farm sixteen and one half miles west of Alva. To their marriage six children were born. Ruth spent her time caring for her children and helping Frank with the farming. In the fall of 1957 they moved to Alva to make their home and continue farming. Ruth was a volunteer for the Pink Ladies at Share Convalescent Home, as well as a housekeeper in Alva. She was a lifetime member of the V.F.W. ladies Auxiliary, also a long time member of the First Christian Church of Alva. Mrs. Davison was preceded in death by her husband Frank on October 24, 1990, a son Ramon Eugene on December 18, 1932; a grandson Kenneth Davison; a great grandson Elliot Burton; her parents, brother’s and spouse, Dennis and Nellie Jones, Roscoe Jones, J.S. (Jr) and Katherine Jones, Truman (Trap) and Betty Jones, sister’s and spouce, Elsia (Jones) and Buck Ravenstine, and Peggy Lou Jones. Ruth is survived by a daughter and her husband, Mary Lou and Max Murrow of Bluff City Kansas; four sons and their wives, Owen and Veta Davison, Robert (Bob) and Jo Davison, Dean Davison, Jimmie and Marilyn Davison, all of Alva; twelve grandchildren and their spouses, Karen and Bob Allen, Delores and Bobbie Joe Nearn, Roger Davison, Ron and Myra Davison, Renita Davison, Deana and Geert Broekhuizen, Julie and Jim Helm, Shelly and Mark Reed, Anthon and Denise Davison, Arlene and Kim Stauffer, Linda and Ken Seipel, and Lloyd and Vicki Murrow. Twenty-one great grandchildren; twenty great great grandchildren, and four great great great grandchildren; a number of nieces, nephews, other relatives and friends. PDF Printable Version

The family of Ruth Davison created this Life Tributes page to make it easy to share your memories.

Send flowers to the Davison family.