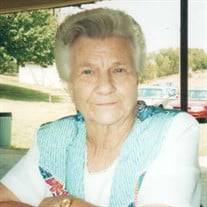 Ruby Arlene Tatro, born on April 14, 1927 in Cherokee, Oklahoma in the family home of Joseph Steele and Ruby Valentine (Shreeve) Tatro, passed away on October 6, 2017 at the age of 90 years, 5 months, and 22 days. Arlene attended the Cherokee school system and graduated with the class of 1945. Miss Tatro was united in marriage to Harold Loyd Boham by Rev. W.A. Keller in the parsonage of his home in Cherokee on October 20, 1946. To this union three children were born: Loyd, Rex, and Carol. When her children were all in school, Arlene began working for Fergie and Rose at Ferguson's Laundry. She then worked as a cook for over 30 years in the Alva school system, including the schools of Longfellow, Alva Middle School, and Lincoln School, where she finally retired. Arlene was a wonderful and fun-loving grandma. She enjoyed the time she had with her grandkids, making them orange Julius drinks, snapping green beans, and garage sealing! Everyone loved to stay at grandma's! Arlene loved participating in the Red Hats Society, going to the Senior Citizens, riding the bus, and enjoying the bus drivers. Arlene was preceded in death by her parents, Joseph and Ruby Tatro, her husband Harold on September 2, 2004, her siblings Bernell Tatro, Jessie Tatro, infant brother Billy Joe, and Delia Mae Niedens, and her two daughters-in-law Brenda Boham and Luanne Boham. Ruby Arlene is survived by her sons Loyd and Rex Boham, as well as her daughter Carol Powers and husband, Victor, all of Alva; three grandsons, Danny Boham of Tulsa, OK, Bart and wife, Leah, of Alva, and Travis Boham of Alva; two granddaughters, Dayna Pedersen and husband, Stan, of Amorita, OK, and Lisa Sellers and husband, Jessie, of Dewey, OK; seven great-grandchildren, Austin, Brandon, Tanner, Kyler, Colton, Kinley, and Blaze; a sister, Rachel Mellott and husband, Curly, of Enid, OK; two sisters-in-law, Lucille Johnson and Vera Boham, both of Alva; many other nieces, nephews, relatives, and friends. Memorial contributions may be made to The Alva Senior Citizens Nutrition Center through Wharton Funeral Chapel.

Ruby Arlene Tatro, born on April 14, 1927 in Cherokee, Oklahoma in the family home of Joseph Steele and Ruby Valentine (Shreeve) Tatro, passed away on October 6, 2017 at the age of 90 years, 5 months, and 22 days. Arlene attended the Cherokee... View Obituary & Service Information

The family of Ruby Arlene Boham created this Life Tributes page to make it easy to share your memories.

Send flowers to the Boham family.