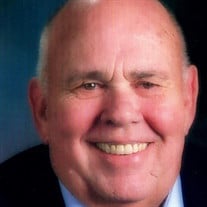 Ross Wessels Graham, son of Lillie Jerry (Gerrels) and Clyde Graham, was born in Cherokee, Oklahoma on September 29, 1939. He departed this life in Alva on March 5, 2021 at the age of 81 years, 5 months and 4 days. He attended the Driftwood school system, graduating with the class of 1957. He later went on to receive his Bachelor of Science from Northwestern Oklahoma State University. Ross was united in marriage to Juanita Webster on July 3, 1965 in Carmen, Oklahoma and to this union a daughter, Julie Virginia, was added to the family. They made their home in Enid, Oklahoma where Ross worked for the Hackney Steel Company. Later, they moved to Carmen, Oklahoma and he went to work at the Carmen Bank as a teller. He worked his way up in the banking profession and became Vice President of Operations at Alva State Bank and Trust in Alva, Oklahoma. Ross retired in 2001. After retirement he continued to pursue his hobby of working with wood. He was an artist in woodworking and enjoyed giving away projects to friends and family. Ross seldom missed morning coffee at McDonald’s with his longtime friends. Ross loved the Alva community and participated in several civic organizations including the Lions Club. Ross was also a member of Alva Church of God and assisted in the construction of the church. Ross and Charlene were married on September 17, 2004 in Colorado Springs, Colorado and resided in Alva, Oklahoma. Ross’s family grew to include Charlene’s children, grandchildren, and her 7 brothers and sisters. Ross especially enjoyed attending the annual family reunions and visiting with everyone. Ross and Charlene enjoyed traveling together, especially on the cruises they took with Ross’s late brother Fred and his wife Donna. There was always fun to be had when Ross decided to take a short cut resulting in an extended trip. Ross was preceded in death by his parents Clyde and Jerry Graham, his wife, Juanita Fae, his brother Fred and his wife Donna Graham, and an infant sister. Ross is survived by his wife Charlene Graham, Alva; his children Julie Graham Caine, Edmond, Oklahoma; Jennifer Foote (Mike Womack), Wickenburg, Arizona; Frank Foote (Colette), San Tan Valley, Arizona; grandchildren Syerra Jenkins, Damon Caine Jr., Che’lecee Caine, D’Marija Caine, Tyler Martin, Randy Abila, Andrew Foote, Corey Foote, Tanner Foote, and Hunter Foote; 5 great-grandchildren; sister-in-law Virginia Green, Enid, Oklahoma; two nephews, Greg Graham and family, Cherokee, Oklahoma; Douglas Graham and family, Burlington, Oklahoma; a long list of family and lifelong friends. The most wonderful things about Ross were he always had a smile, never knew a stranger, and had a profound love of God. He was happiest when the kids and grandkids came to visit, and he could give someone besides Charlie a hard time. The family extends their gratitude to the nurses and staff at Beadles Nursing Home and to Dr. Self. In lieu of flowers, please contribute to the Beadles Nursing Home Activity Fund or the Cherokee Strip Museum; c/o of Wharton’s Funeral Chapel.

Ross Wessels Graham, son of Lillie Jerry (Gerrels) and Clyde Graham, was born in Cherokee, Oklahoma on September 29, 1939. He departed this life in Alva on March 5, 2021 at the age of 81 years, 5 months and 4 days. He attended the Driftwood... View Obituary & Service Information

The family of Ross Wessels Graham created this Life Tributes page to make it easy to share your memories.

Send flowers to the Graham family.