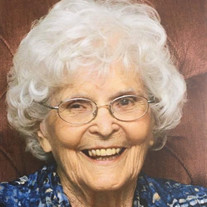 Rose Mary Killion Collins passed away October 4 at Cherokee Manor at the age of 97. Services will be held at 2:00 PM, October 14, at the First Baptist Church in Cherokee under the direction of Wharton Funeral Home. Interment will follow at the Byron-Amorita Cemetery near Byron, Oklahoma. Rose Mary Maxwell was born September 12, 1920, in Huntington Beach, California, to Miles Maxwell and Evelyn (King) Maxwell. Her parents moved to Oklahoma when she was two years old. They lived in Muskogee, then Choteau. They moved to Lucien, Oklahoma in 1929. Rose Mary graduated in 1937 from Haywood High School and from the University of Central Oklahoma in May of 1941. She accepted a position as civilian instrument instructor for the Army Air Corps Base in Amarillo, Texas. There she met Quentin Killion who was an Army instructor at the base. They were married September 26, 1943, in Lucien, Oklahoma. In 1945 her husband served as a B-29 aerial engineer in Rio de Janeiro, Brazil, where she was able to join him. He was honorably discharged from the Army in January, 1946 at which time they established their home on a farm near Byron, Oklahoma. One son and two daughters were born from this union. Their son, Quentin Maxwell Killion died in infancy. Rose Mary taught high school English, speech, and business classes for 20 years. Most of her teaching was done at Byron Driftwood High School with the last five years at Chaparral High School in Kansas. She also assisted Quentin in their farming operation until his death April 29, 1989. Quentin and Rose Mary were members of the Byron Christian Church where she taught Sunday school for over 40 years and was Treasurer of the church. She was involved in many community affairs and organizations: Hospital Volunteers, Library Board, Literacy Council, Alfalfa County Museum board, Mother�s Club, ABBD Senior Citizens, B.P.O.E. She married Vernon Collins (who had served as the family lawyer for 30 years) on September 12 1998. Vernon passed away December 13, 1989. Rose Mary said she had been blessed to have been loved by two different but remarkable men. She was preceded in death by her husbands, Quentin Killion and Vernon Collins, her infant son, Quentin Maxwell Killion, her parents, three brothers and three sisters. Surviving Rose Mary are her sister-in-law Jo Maxwell, daughter Kathie and husband Dwight Wessels of Cherokee, Oklahoma, daughter Vicki and husband Roger Guess Jr. of Grapevine, Texas, seven grandchildren, an 24 great grandchildren, David Collins and his wife Peggy, Jim Collins and his wife Brenda, Mary Sue Hale and her husband Stuart, eight step grandchildren, seven step great grandchildren, plus nieces, nephews and many friends and students. In lieu of flowers, Rose Mary asked donations be directed to Brad Hofen Ministries, P.O. Box 273, Alva, Oklahoma 73717

Rose Mary Killion Collins passed away October 4 at Cherokee Manor at the age of 97. Services will be held at 2:00 PM, October 14, at the First Baptist Church in Cherokee under the direction of Wharton Funeral Home. Interment will follow at the... View Obituary & Service Information

The family of Rose Mary Killion Collins created this Life Tributes page to make it easy to share your memories.