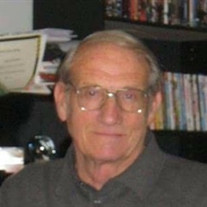 Rodney James Mustard was born to Doris Evenlyn (Higgins) Mustard Kornele and Alonzo Flinton Mustard Jr. on October 3, 1940 in Sterling Kansas. He passed away at the age of 76 years 11 months and 15 days at St. Mary Regional Medical Center surrounded by his loving wife of 52 years and their four children and numerous family members. As a little boy Rodney and his parents moved around due to his Step-dad (Albert Kornele) job he obtained his general education from 22 different Schools up through High school then Receiving his GED in the United States Air Force in 1957. Rodney served in the United States Air Force from the year of 1957 to 1962. In the Air Force Rodney learned his trade of Heating and Air Conditioning. After his service in the Air Force he moved to Alva, Oklahoma. That is where he was introduced to Miss Lorena Blanche Doak through family. Rodney had met the love of his life, and moved to McCook Nebraska to be near his sweetheart. After a few years of writing love letters to one another, he then married the love of his life. They were united in Marriage in McCook Nebraska on February 27, 1965 by Reverend Munday at the Egan Park Baptist Parsonage. Of their union of marriage they had four children: Rodney Glenn, Lee Edwin, Tina Marie, and Teresa Lorena. Rodney and Blanche made their home in McCook Nebraska raising their children. In 1968 they moved their family back to Alva, Oklahoma where Rodney worked for Max Savere. He then partnered in with Larry Roberts buying Savere Air Conditioning. Rodney then sold his half of the Air Conditioning in 1976 and started his own business of Rod�s Refrigeration and continued that for the next 41 years until his death. During that time he also worked for 5 years at NWOSU in Alva, Oklahoma. He spent his free time reading the manuals of the water-cooled units. He loved a challenge, and loved working with those guys. Rodney was preceded in death by his Father Alonzo Mustard Jr., Mother Doris Kornele, Step-Father Albert Kornele, and Son-in-law Donald Altobella and three sisters: Bessie, Sheila and Cindy. He is survived by his lovely wife of 52 years, Blanche Mustard, two sons, Rodney and wife Tammy Mustard of Alva, Oklahoma, Eddie Mustard of Alva, Oklahoma. Two daughters: Tina McKinley of Jenks, Oklahoma, Teresa Altobella of Alva, Oklahoma. Two brothers: Alonzo and wife Brenda Mustard of Sterling Colorado. Gary and wife Cathy Mustard of Sterling, Colorado. One Sister: Frances and her husband Ed Doak from Alva, Oklahoma. 16 grandchildren: Jessica Marie, Kayla Dawn, Amanda Lorena, Teirna Rae, LeAnna Christine, Candis Rene, Brandon Wayne, Anthony �Tony� James, Colby Ray, Doris Frances Marie, Tierna Rene, Jacob Lee, Cammi Morgan, Parker Cole, Jayson Blake, Jaelyn Mae. 12 great-grandchildren: Haedynn Heath, Koltynn Keith, Cashius Wesley, Tyler Wade, Jonathan Gene, Lexi Jane, Mallory Paige, Heston Glenn, Allison Rene, Brysen Ray, Dalton Kane, Jocee Jane, Arianna Marie. Lisa Miles and husband of McCook Nebraska. Numerous Nieces and Nephews. Contribution may be made to a Love Fund in care of Wharton Funeral Chapel.

The family of Rodney Mustard created this Life Tributes page to make it easy to share your memories.

Send flowers to the Mustard family.