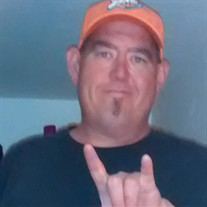 Robert John, son of Cathy (Tippit) and Robert John West was born on December 28, 1973 in Edmond, OK. He passed away on September 12, 2021 at his home in Dacoma at the age of 47 years, 8 months and 15 days. He grew up in Oklahoma City and started out living on the wrong side of life. He was sent to live in the Goodland boys’ home in Hugo, OK at the age of 14. He was active in FFA showing pigs and helping with livestock judging. This was a major turning point in his life. After graduation he moved back to Oklahoma City and helped his father with his drywall business. He loved to play dominoes with his father (Pops), uncle Roy and his two brothers Jeremy and Ralph. He was also quite skilled at playing darts with whom he played with some of the best in tournaments from all over the world. Robert met the love of his life at a benefit dart tournament in June 2008 and it was love at first sight. They were married, March 8, 2009 and to this union he inherited three children and seven grandchildren. All of whom he loved very much and claimed as his own. He was very proud of his family and loved them dearly. Robert worked for the OK Department Corrections, as a Security Officer at the James Crabtree correctional facility in Helena, OK from September 2009 to December 2019. He really enjoyed what he did and felt that in many ways the life he had led before had prepared him for that kind of work. In May 2021 he went to work for the city of Alva. He was learning all kinds of new things and enjoying every minute. He really liked the crew he worked with and he was even studying for his CDL. He was preceded in death by his mother-in-law, Arline Joyce Hartsuyker and a granddaughter, Janet Joyce Thomas. Robert is survived by his loving wife Sharon of the home. His parents Robert and Cathy West of Oklahoma City, OK. His children, Kristy and Robert with their children, Gabe, Izzy and Cynthia of Kiowa, KS. AJ and Terie with their children, Elizabeth, Matthew, and Mark of Lubbock, TX. And Katlyn and Chuck of Copperas Cove, TX. Two sisters, Erica McCurly of Egypt. Andrea and Chris Masters of Moore, OK. Two brothers Jonathan and LaVeda West of Crescent, OK. And Tyler and Angie Goins of Sand Springs, OK and a number of nieces, nephews, cousins, friends, and other family. The family requests that in lieu of flowers please make donations to Dacoma, Church of God through Wharton funeral Chapel

Robert John, son of Cathy (Tippit) and Robert John West was born on December 28, 1973 in Edmond, OK. He passed away on September 12, 2021 at his home in Dacoma at the age of 47 years, 8 months and 15 days. He grew up in Oklahoma City and started... View Obituary & Service Information

The family of Robert John West II created this Life Tributes page to make it easy to share your memories.