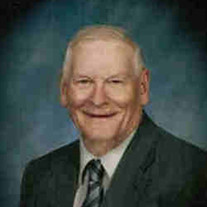 Robert Wayne, was born on May 6, l93l, to Alvina and Henry Fritzemeyer in Cook, Nebraska. He passed away September 19, 2008 in Amarillo, Texas at the age of 77 years, 4 months and 13 days. He grew up in many locations due to his father working for the Santa Fe Railroad. They settled in Hammon, Oklahoma, where he graduated Salutatorian from Hammon High School. After graduation, Bob went to work for Santa Fe Railroad following in his father’s footsteps. He was assigned to Freedom, Oklahoma, where he met the love of his life, Barbara Ann French. They were married on December 23, l95l. Bob continued working for the railroad until the Korean War. He went into the Army and served his term leaving as a Staff Sergeant. He worked for General Clelland in the Adjutant General’s office. Bob said when he was in the Army and was in charge of some men under him he would say, “My name is Major Appliance and my commanding officer is General Electric.” Bob always had that kind of humor. When Bob left the Army, he went back to the railroad and continued his “honeymoon” with Barbara. They had only been married five months when he went to the Army. On October l3, l957, Bob became the proud father of Suzanne Gail Fritzemeyer. Bob drove Barbara to the hospital in a 1956 Chevy at l00 mph. Bob worked for Santa Fe for 42 years. He retired to a life of ease with Barbara in Amarillo, Texas. Bob had a love for his God, family, fishing, and camping. He worked on cars and made his own tools. Bob passed away with his wife and family members by his side. Mr. Fritzemeyer was preceded in death by his parents, three brothers, James, Warren and Dallas, and a great nephew, Terry. Bob is survived by his wife, Barbara, his daughter, Suzanne and her husband, Travis Block, two grandchildren, Jacob Block, Jr., and Joshua Lloyd Block, his sister, Patricia “Cookie” Hoban and her husband, Bob Hoban, and many nieces and nephews. PDF Printable Version

Robert Wayne, was born on May 6, l93l, to Alvina and Henry Fritzemeyer in Cook, Nebraska. He passed away September 19, 2008 in Amarillo, Texas at the age of 77 years, 4 months and 13 days. He grew up in many locations due to his father working... View Obituary & Service Information

The family of Robert Wayne Fritzemeyer created this Life Tributes page to make it easy to share your memories.

Robert Wayne, was born on May 6, l93l, to Alvina and Henry Fritzemeyer...

Send flowers to the Fritzemeyer family.