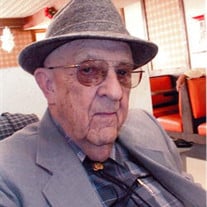 Robert Earl, son of Jennie (Snow) and Jess Reneau, was born on February 8, 1918 near the village of Gibbon in Grant County, Oklahoma. He passed away at the Share Medical Center on the 24th of March at the age of 94 year, 1 month and 16 days. After attending school in Gibbon and Manchester he graduated from Anthony High School in 1936. Bob worked as a jeweler apprentice in Alva, Oklahoma from 1938-1941. In 1942 he was drafted as a civilian to work as an Instrument Technician for the U.S. Army Air Corp. He worked in repair depots in San Antonio, Texas, Oklahoma City and Dayton, Ohio. On March 6, 1938, in Alva, Oklahoma Maurine Smith was married to Robert (Bob) Reneau of Anthony, Kansas, then a student at Northwestern. To their marriage two children were born, Robin (Mrs. Harry King), of Liberal, Kansas and Jim, of Dodge City. Kansas. Maurine passed away on October 7, 1987. Following WWII Bob and Maurine opened a jewelry store in Alva, one of six they owned and operated over the years; in Oklahoma, Kansas, Texas and Colorado. Bob, with various partners, also operated a construction company in the late 50’s which built 178 houses in Northwest Oklahoma and Southern Kansas. The Public Installment Loan Company at the same time period was also one of his enterprises. Bob was a lifetime member of the Methodist Church and enjoyed being a Sunday school teacher and a lay speaker in that organization. He had been a Rotarian since 1940 and was a Rotary District Governor in 1956; a member of the Alva Masonic Lodge and a 32nd degree Mason since 1955. The Reneau Family maintained a high interest in NWOSU having helped more than one student acquire a University degree. He served as Director of Development for the University Foundation for many years. During this time it’s assets increased by millions of dollars. He was awarded an honorary Master’s Degree for his accomplishments with the foundation. Mr. Reneau was preceded in death by his daughter, Robin; his parents, and two sisters, Elizabeth Perry and Marjean Reneau. Bob is survived by his son Jim; two grandchildren, Julianne King; Jeff King and his wife Amie; two Great grandchildren, Rylee and Ryan; a sister and her husband, Betty Lou and Olin Hodge; a son-in-law, Harry King. A special friend, Lorraine Malzahn and a host of nieces, nephews, other relatives and friends. PDF Printable Version

Robert Earl, son of Jennie (Snow) and Jess Reneau, was born on February 8, 1918 near the village of Gibbon in Grant County, Oklahoma. He passed away at the Share Medical Center on the 24th of March at the age of 94 year, 1 month and 16 days. After... View Obituary & Service Information

The family of Robert Earl Reneau created this Life Tributes page to make it easy to share your memories.

Robert Earl, son of Jennie (Snow) and Jess Reneau, was born on...