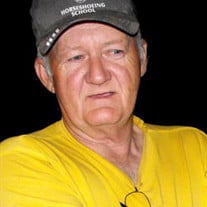 Robert "Bob" Duane Beason was born March 12, 1946 to Bennetta Sherrill (Bircher) & Luther Duane Beason in Alva, Oklahoma and he passed away on February 5, 2013 in Bass Hospital in Enid ,Oklahoma. He was preceded in death by his mother , father , a sister-in-law Francis Beason , 3 nephews and 1 niece. He is survived by his wife Carol (Shafer) Beason of 37 years, 3 Daughters , Bennetta Fulkerson & husband Curtis of Alva,Ok , Melissa Beason & Fiance Jimmy Haight of Alva, Ok, Wendi Beason & husband David of Alva, Ok. 1 Son Robert Beason Jr. and wife Rebekah of Alva. 2 Brothers Charles Beason of Edmond, Ok and Jeff Beason of Alva,Ok. 11 Grandchildren Angel & Helen Hawkins of Waynoka, Ok, Brandon & Sharra Fulkerson of Skiatook, Ok, Raechel & Kenneth Shiplet of Headrick, Ok, Christian Wheeler,Jalin & Stephen Willyard , Jeremy Sterling & Jim Beason of Alva,Ok. 4 special family friends Kenny Knabe, Linda Hendricks , Garry & Mary Miller. Many other relatives & friends. Bob attended grade schools in Alva, High School in Edmond , Ok graduating in 1964, and he attended OU college graduating with a B.A. in Abnormal Psychology. In 1975 He married Carol Shafer and resided in Alva. He worked for Rhodes Salvage around that time . In 1977 Bennetta Sherrill was born and shortly after the family moved to Oklahoma City and he started working in the oilfield . In 1979 Melissa Dawn was born and soon after the family moved to Elk City where he continued to work in the oilfield . In 1981 Robert Duane Jr. was born and the family moved back to Oklahoma City where he continued working in the oilfield. In 1982 the family moved back to Alva where Bob started working at Sav-a-Trip . In 1984 he worked at the Ford Garage alongside his Father in law Dean Shafer and in June welcomed the last of his children Wendi Lynn. In 1986 Bob opened his Sign shop Signs By Bob that he kept working in off and on til 2012. Then in 1988 he worked for Bill Smith at the Trading Post . He went back and forth with the sign shop for several years and did mechanic work in between. In 2001 he started working as a carpenter for Jerry Egner in Egner's Cabinet shop til 2006 when the shop closed. He enjoyed fishing and camping with his family and special friends for fun. He enjoyed spending time with his grandchildren . He always loved getting in a politcal debates with anyone that differed their opinion from his . He also loved just shooting the breeze with anyone that would sit long enough to listen. He had many friends and never seemed to meet a stranger. PDF Printable Version

Robert "Bob" Duane Beason was born March 12, 1946 to Bennetta Sherrill (Bircher) & Luther Duane Beason in Alva, Oklahoma and he passed away on February 5, 2013 in Bass Hospital in Enid ,Oklahoma. He was preceded in death by his mother , father... View Obituary & Service Information

The family of Robert Duane Beason created this Life Tributes page to make it easy to share your memories.