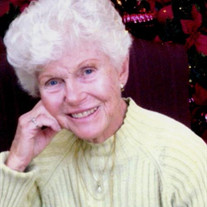 Rita Mae, daughter of William and Marie Jenny (VonDracek) Ring was born February 25, 1931 in Alva, Oklahoma. She passed away in Alva on January 13, 2019, at the age of 87 years, 10 months and 19 days. She attended the Sacred Heart Catholic Grade School for the first four years before moving to the Capron schools. She graduated from Capron with the class of 1949.She attended Northwestern State College for a semester, and then went to the California Airline College in Hollywood. She went to Wichita, Kansas to work for Wesley Hospital, then to Fort Worth, Texas working for Consolidated Air. On June 30 1952 she was married to Jack L. Klick at Luke Airforce Base in Arizona. To their marriage two sons, Jeffrey Lee and Preston Lynn were born. Following their marriage they returned to Alva. They also made their home in several cities in Kansas; Offerle, Healy, Coats, Hazelton, Hutchinson and Baldwin City. While living in Kansas she worked at the University of Kansas at Lawrence in food services. On August 27, 1986 at Miami, Oklahoma she was married to Norman Chambers. Following their marriage they lived in Baldwin City, Kansas. In 1993 they retired and moved to Woodward, Oklahoma to make their home. Mrs. Chambers was preceded in death by her parents, her husband Norman, November 21, 2005 and a brother, Bill Ring, April 22, 1997. Rita is survived by two sons and their wives, Jeff of Woodward and Preston and Jeanne Klick of Manhattan, Kansas; four grandchildren, Allison, Devry, Chris and his wife Heather, Jenna Haas and her husband Tom; three great grandchildren, Ella and Callie Klick and Hunter James Haas. She is also survived by a sister, Lowana Morawitz of Hutchinson, KS; a sister-in-law Eleanor Ring of Alva, and number of nieces, nephews, other relatives and friends. Memorial Services will be held at a later date.

Rita Mae, daughter of William and Marie Jenny (VonDracek) Ring was born February 25, 1931 in Alva, Oklahoma. She passed away in Alva on January 13, 2019, at the age of 87 years, 10 months and 19 days. She attended the Sacred Heart Catholic Grade... View Obituary & Service Information

The family of Rita Mae Chambers created this Life Tributes page to make it easy to share your memories.

Send flowers to the Chambers family.