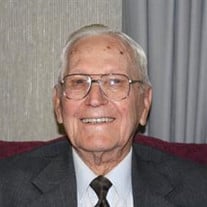 Phil, son of Ada Pearl (Hunt) and Charles Lee Prigmore was born on March 7, 1920 at Alva, Oklahoma. He passed away at the Alva Homestead on August 31th at the age of 94 years, 5 months and 24 days. He attended the Alva School system where he played football, Basketball and track, he was all-state for two years in football in high school. Then at Northwestern State College for two years where he also played football. In 1999 he was given the Northwestern National Championship football ring and in 2009 was the homecoming parade marshal. Phil was a member of the Alva 45th Signal Corp starting in 1936 then W.W.11 and Korea serving for twenty three years. He received the Bronze Star for valor and by Governor Henry Bellman the State of Oklahoma the Meritorious Award. On March 1, 1946 at Medicine Lodge, Kansas he was married to Bonnie Dell Olson. To their marriage a daughter, Linda Diana, was born on November 19, 1946 in Hardtner, Kansas and she passed away on December 27, 2005 and Bonnie on February 1, 2001. Following their marriage they made their home in Alva. After the Korean Conflict in 1952 they moved to Tulsa and in 1953 they were transferred to Oklahoma City. In 1968 they came back to Alva and opened the Alva Office Supply until 1980. They went to the farm Northwest, near Winchester and in 1984 returned to Alva. He was a member of the Alva First United Methodist church, the V.F.W., the American Legion and Elk Lodge. Mr. Prigmore was preceded in death by his parents, a son-in-law, Larry Riley, four sisters, Alta Hofen, Katherine Mohr, Viola Strausbaugh and Ada Brockman, five brothers, Tandy, Tom, Carl, Orville, and Vernon. Numerous military friends and loved ones. Phil is survived by a brother, Earl, three grandchildren and their spouses, Dawn and Clint Shafer, Lenice and Gene Turner and Kyle and Kerri Schwerdtfeger, great-grandchildren, Meagan Shafer, Brennon and Heather Shafer, McKayla and Chance Plett, Joshua Haydon, Jacob and Kaitlyn Haydon, Hunter Padgett, Hayden Turner, Tate Schwerdtfeger and Karli Schwerdtfeger, great-great-grandchildren, Liam, Noah, Kacie, Kursten, Kamryn and Jaylynn. A number of nieces, nephews, other relatives and friends. PDF Printable Version

Phil, son of Ada Pearl (Hunt) and Charles Lee Prigmore was born on March 7, 1920 at Alva, Oklahoma. He passed away at the Alva Homestead on August 31th at the age of 94 years, 5 months and 24 days. He attended the Alva School system where... View Obituary & Service Information

The family of Phil A. Prigmore created this Life Tributes page to make it easy to share your memories.

Send flowers to the Prigmore family.