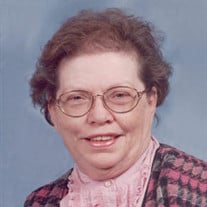 Peggy Jean, daughter of Juanita Maude (Guthrie) and Gerald Leon Hastings was born on November 21, 1934 in Anthony, Kansas. She passed away at the Enid St. Mary’s Hospital on the 30th of June at the age of 74 years, 7 months and 9 days She attended the Wakita School System where she graduated with the class of 1952. On May 11, 1982 she received her Bachelors Degree in Library Science. Miss Hastings was married to David Arlo Kenyon Sr. on May 12, 1953 at the Christian Church in Wakita. To their marriage four children, Connie Jo, Jacque Carol, Vickie Lynn and David Arlo Jr. were born. Mr. Kenyon passed away on October 26, 1962. Following their marriage they lived in Wichita, Kansas. After her husbands death she moved to Alva and worked at the Alva General Hospital as a Nurses Aide. Mrs. Kenyon was married to James L. Dunlap on May 11, 1972 at the Alva First Christian Church. Following their marriage they made their home in Alva. In 1983 they moved to Cleveland, Oklahoma where she was a Librarian for the Conners Correction Institute of Hominy, Oklahoma where she retired from and they then moved back to Alva in 2002. Mrs. Dunlap was a member of the Alva First Christian Church. She was preceded in death by her daughter, Vickie Lynn on October 18, 1961 and her parents. Peggy is survived by her husband James, two daughters and their husbands, Connie and Robert Buckley of The Lake of the Ozarks, Missouri, Jacque and George McBride of Waco, Texas; a son and his wife, David and Vida Kenyon of Alva; 13 grandchildren; two sisters and their husbands, Carol Barr and Don Tener of Wichita, Kansas and Connie and Richard Drisko of Augusta, Georgia. PDF Printable Version

Peggy Jean, daughter of Juanita Maude (Guthrie) and Gerald Leon Hastings was born on November 21, 1934 in Anthony, Kansas. She passed away at the Enid St. Mary&#8217;s Hospital on the 30th of June at the age of 74 years, 7 months and 9 days... View Obituary & Service Information

The family of Peggy Dunlap created this Life Tributes page to make it easy to share your memories.

Send flowers to the Dunlap family.