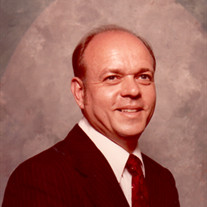 Paul Ray, son of Mary Helen (Sparks) and Pete Schroeder was born on the family farm near Cleo Springs, Oklahoma on October 16, 1938. He passed away at his home in Paola, Kansas with Hospice Care after a long battle with Parkinson’s disease on the 2nd day of June at the age of 72 years, 6 months and 17 days. He attended the Ruby rural grade school for one year, then the Cleo Springs School System where he graduated with the class of 1956. After graduating he joined the U.S. Army and was stationed in Korea for a year and a half. Paul attended OSU and Northwestern State College majoring in History and Economics. On June 28, 1968 in Pawnee, Oklahoma he was married to Judy Conner. Following their marriage they made their home in Enid, Oklahoma. Paul started working in the food service industry establishing Popeye’s Chicken Franchises. In 1987 they were moved to the Kansas City area. In 2002 he retired due to his Parkinson’s disease. His hobbies consisted of; rebuilding international tractors, collecting toy international tractors, rebuilding lawn mowers, tinkering in the barn and caring for his Studebaker Avanti. He was a member of the Nazarene Church in Cleo Springs. Mr. Schroeder is preceded in death by his father, a sister and two brothers. Paul is survived by his wife Judy of the home, three children and their spouses; Coletta and Alan Wharton of Alva, Oklahoma, Jerry Ray and Julie Schroeder of Seattle, Washington and Eyvette and Larry Herman of Hugoton, Kansas seven grandchildren and one great granddaughter. His mother Mary Helen, of Enid, Oklahoma two sisters, Phyllis and Vernon Hood of Pineville, Missouri and Wanda and Mark Kiner of Perry, Oklahoma. A number of nieces, nephews, other relatives and friends. PDF Printable Version

Paul Ray, son of Mary Helen (Sparks) and Pete Schroeder was born on the family farm near Cleo Springs, Oklahoma on October 16, 1938. He passed away at his home in Paola, Kansas with Hospice Care after a long battle with Parkinson&#8217;s disease... View Obituary & Service Information

The family of Paul Ray Schroeder created this Life Tributes page to make it easy to share your memories.

Send flowers to the Schroeder family.