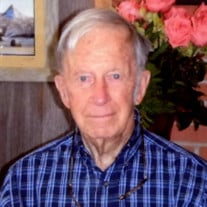 Paul Floyd Nighswonger was born in Alva, OK on April 14, 1923 to Howard Lewis and Lucie (Floyd) Nighswonger. He grew up on the Woods County farm, homesteaded in 1902 by his grandfather, Paul H. Nighswonger, surrounded by numerous extended family members and a special mentor, Louie Thurman. Eight years of grade school were completed at Greenleaf with Paul often driving himself to school. He attended high school at Horace Mann on the Northwestern campus. He began college at Northwestern, but in 1943, entered the Army, eventually earning rank of 1st Lieutenant as a B-17 co-pilot in the Army Air Corps. He particularly enjoyed his tour at Foggia, Italy, remembering stories and Italian words for the rest of his life. He finished college in 1949 and Elaine Moore became his bride on May 6, 1951. The couple settled on the home place 12 miles northwest of Alva. To this union six children were born. In 1964, Paul and Elaine moved to Norman, Oklahoma where Paul began graduate school at the University of Oklahoma. After five years, he earned his PhD in Plant Ecology and was hired to teach at his alma mater, NWOSU. Paul found his true calling as a teacher, covering classes in botany, biology, genetics, ornithology, and a favorite, Resource Awareness. His colleague, Dan Shorter, was a lifelong friend, and the two experienced wonderful adventures taking students on local field trips, as well as out of state and even to Mexico. He retired from Northwestern in 1994. Paul had many hobbies and interests, such as collecting stamps, flying airplanes, banding birds, collecting books and traveling. He was always ready to start a trip! He was an especially good photographer. His plant specimens at the OU Herbarium are known for their artistry. He was active in the community, serving on boards for the museum and his local rural water district. He was a long time member of the Oklahoma Academy of Science, Oklahoma Ornithological Society, and Oklahoma Native Plant Society. For many years, he taught Sunday school at Cedar Grove Wesleyan Church. Paul died March 23, 2014 at Share Convalescent Center, completing a long life of 90 years, 11 months and 9 days. Preceding him in death were his parents, his sister, Grace Whitson, and an infant grandson, Mitch Sumner. He is survived by his wife, Elaine, of the home, children Carmen Eicken of Alva, Clara Nell (Ken) Siroky of Roy, Montana, Tom (Cynthia) Nighswonger of Alva, Howard (April) Nighswonger of Alva, Sally Nighswonger of Alva, and Alice Sumner of Evanston, Ill. Grandchildren are Clinton Nighswonger and fiancé Diana Neumeyer, Tyler (Lindsey) Nighswonger, Henry Nighswonger, all of Alva, Lewis Nighswonger of Sioux Center, Iowa, Susanna and Sam Siroky of Roy, Montana, and Lucinda and Ellen “Onnie” Sumner of Evanston, Illinois. PDF Printable Version

Paul Floyd Nighswonger was born in Alva, OK on April 14, 1923 to Howard Lewis and Lucie (Floyd) Nighswonger. He grew up on the Woods County farm, homesteaded in 1902 by his grandfather, Paul H. Nighswonger, surrounded by numerous extended family... View Obituary & Service Information

The family of Paul Nighswonger created this Life Tributes page to make it easy to share your memories.

Send flowers to the Nighswonger family.