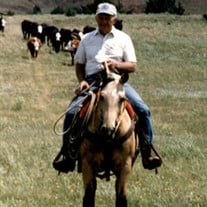 Paul Norton, son of Beulah Ruth (McMullen) and John Theodore Koppitz was born on January 7, 1923 near Alva, Oklahoma. He passed away at the Sterling House in Enid, Oklahoma on the 28th of May at the age of 86 years, 4 months, and 21 days. He attended the High Springs Rural Grade School and graduated from Northwestern High School. He went to Northwestern State College where he lettered in baseball and basketball and received his Bachelor of Science degree in Industrial Arts. Paul enlisted in the United States Marine Corps on September 10, 1942. He served in the Pacific Theater where he participated in the ceremony of surrender of the Japanese military in Tsintuo, China. Second Lieutenant Koppitz at Okinawa received two Purple Hearts and two Bronze Stars for his service to his country. On June 20, 1950 in Alva, he was married to Georgiana Jean Barker. To their marriage, three daughters, Rinda Sue, Shelley Kay and Jonni Ann, were born. Following their marriage, they lived and farmed north of Alva. He taught at Lambert High School where he coached baseball. Paul retired from the Alva School System where he taught science and coached baseball, basketball, and started the girls softball program. He was a member of the Alva First Christian Church, Alva Golf and Country Club, Black Wing Post of the V.F.W., Alva Elks Lodge, Oklahoma Education Association, Disabled American Veterans, American Quarter Horse Association, and American Hereford Association. Mr. Koppitz was preceded in death by his wife Georgiana on September 6, 1981; a daughter Rinda on December 12, 1998; his parents; a sister, Margaret Haraughty; a brother, Burr, and an infant brother, John. Paul is survived by his two daughters, Shelley Koppitz of Laverne and Jonni and her husband Richard Cinnamon of Garber; five grandchildren, Jodi and Wacy Sharp, Kristi and Scott Steinert, Ryan Paul Cinnamon, Lesli and Jason Bollman, and Ricki Cinnamon; four great grandchildren, Gunner, Anndi, Kennon Sharp and Colton Steinert; two cousins Harold and Dick Koppitz; a number of nieces, nephews, other relatives and friends. PDF Printable Version

Paul Norton, son of Beulah Ruth (McMullen) and John Theodore Koppitz was born on January 7, 1923 near Alva, Oklahoma. He passed away at the Sterling House in Enid, Oklahoma on the 28th of May at the age of 86 years, 4 months, and 21 days. He... View Obituary & Service Information

The family of Paul Koppitz created this Life Tributes page to make it easy to share your memories.

Send flowers to the Koppitz family.