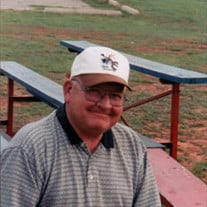 Dr. Resler passed away on Thursday, February 9, 2012 from complications of pneumonia and diabetes. He was 71 years old. He was surrounded by his wife, Suzanne and two daughters, Viki and Trina as well as his granddaughter, Cadee at his time of passing. He was fortunate that many of his family and friends gathered to be with him in his last days. His daughter Rhonda and his grandchildren, Tanner and Jordan McGehee, Tyson, Cadee, and Trevor Fromm and Piper Poindexter were near. Pete was born on January 22, 1941 in Los Angeles, California where his father Paul Resler was stationed in the Navy. At 9 months old, with his father out to sea and a very young mother, he was lovingly adopted by his aunt and uncle, Lillie and Clint Bahm of Cherokee Oklahoma. There he grew up with an older sister Doris and older brother Herb. He played football and flourished in the small town. In a graduating class of 15 boys, he was one of 5 to go on to complete a doctorate degree from college. He was an athlete and a scholar. Pete earned a scholarship to OU and played football under Bud Wilkenson in 1959-1961. He then went to Northwestern and played football under Art Parkhurst. He graduated from Ft. Hayes State University in Hays, Kansas in 1964 and went on as a graduate assistant at that university. He earned his master’s degree in physical education in 1966 and began his career in education as the very first physical education coordinator in Dodge City, Kansas. This gave him great insight into how important a well rounded physical education program was to a child – he learned that not all children excel at the same things but that they should all have an opportunity to enjoy exercise and movement in some way. Then, Paul and his wife moved to Overland Park, Kansas where he taught physical education for eleven years at Rose Hill Elementary. Pete began his military career in 1963 when he began basic training with the Oklahoma National Guard. His career continued with the military with the Kansas National Guard where he served in Infantry, Military Police, Civil Affairs, and as Commander of the National Guard Unit in Coffeyville. He took great pride in the opportunity to serve his country and retired from the military as a Major. Pete earned his doctorate in education administration from Kansas University in May of 1984. During this phase of his education he transitioned from elementary physical education to elementary administration and obtained his first “Principal” job in Coffeyville, Kansas. He went on to Skiatook, Oklahoma as an elementary school principal and then moved “home” to Alva, Oklahoma where he was principal at Lincoln, Longfellow and Washington Elementary Schools. Dr. Resler had a lifelong love of reading. His classmates remember him as having read every book in the library by 7th grade and that he encouraged them to read for the love of it. He passed this love on to his children and grandchildren and encouraged all the children he touched to read… read to learn, read to relax, read to expand your world. Paul was preceded in death by biological parents Paul Resler and Billie Miller, his mother, Lillie Bahm and father, Clint Bahm as well as his sister Doris Strong. He is survived by his wife, Suzanne Harzman Resler of Alva; children Rhonda Sherman of Tulsa, Viki Resler of Enid, and Trina Resler of Alva; brother Herb Bahm of Wichita; grandchildren Jay Carpenter, Leanne Pinion and Chris Carpenter, Tanner and Jordan McGehee, Tyson, Cadence and Trevor Fromm, and Piper Poindexter; great granddaughter, Kyliegh Pinion; as well as numerous nieces, nephews, other relatives and friends. PDF Printable Version

Dr. Resler passed away on Thursday, February 9, 2012 from complications of pneumonia and diabetes. He was 71 years old. He was surrounded by his wife, Suzanne and two daughters, Viki and Trina as well as his granddaughter, Cadee at his time... View Obituary & Service Information

The family of Paul (Pete) Douglas Resler created this Life Tributes page to make it easy to share your memories.

Dr. Resler passed away on Thursday, February 9, 2012 from complications...