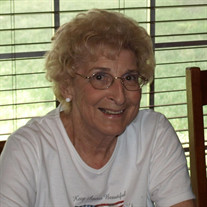 Patricia Ann Phillips was born in Wichita, Kansas, August 28, 1931. She was the only child of John and Irene Phillips. Soon after they moved to Wewoka, Oklahoma. She began piano and dance lessons at age 5 and continued thru high school. When World War II broke out, they moved to Portland, Oregon, where her parents worked on the the airplanes. They lived in a boarding house with many of the workers and she became the favorite of all the residents. Wewoka became their home again for her junior and high school years. Her mother was a seamstress and her father had an oil trucking business. She continued playing piano and was a percussionist in the marching band and bass player in the concert band. While living there, her mother started a Camp Fire Girls program in which she was actively involved. She was an accomplished swimmer, giving lessons and lifeguarding in the summers. After graduation from Wewoka High School in 1949, she attended the University of Oklahoma, joining a sorority. She met the love of her life, Charles White, from Blackwell. In May of 1950 he graduated from OU and they became engaged. They surprised their parents when they eloped on August 21 that summer and made their home in Blackwell. in 1952 daughter, Kay, was born in Blackwell. Later that year they moved to Wewoka, where daughter, Terry, was born in 1956. They moved back to Blackwell in 1958. Charles taught high school and began working on his Master’s Degree from OU, followed by his Doctorate Degree from OSU. During the time Charles began working on his advance degrees, Pat began working in Don Loftis Insurance Agency. Her experience in that field led her to another insurance agency, Kent W. Johnson when they moved to Alva in 1967. Charles began his work as Dean of Students at Northwestern Oklahoma State College, also becoming Education Department Chair while teaching psychology and the Counseling Practicums. Pat also branched out into real estate in 1980 and owned her own real estate agency, Pat White Realty. During that time she served on the Board of Directors of the Chamber of Commerce and as a City Council member. She belonged to the Alva First Christian Church. She attended there and sang in the choir from 1967 until she moved to Enid. Both of her daughters were married in the church. She was a staunch supporter of NWOSU. Through the years, she helped host faculty teas at the President’s home, support the NWOSU foundation, attend athletic events, homecoming events and concert series. Her home was always open to the community, college, and golfing friends of theirs and those of her daughters. Since she did not ever complete her college degree, she and Charles were determined that their daughters would earn college degrees. Their oldest daughter, Kay, followed in her dad’s footsteps to earn a teaching degree which helped put her husband, Larry Kiner, through dental school. They gave she and Charles their first two grandsons, Kyle and Greg, and raised them in Fairview, Oklahoma. Their youngest daughter, Terry, became a pharmacist and also help put her husband through dental school. They followed along with two more grandsons and live in Wichita, Kansas. She and Papa loved having these noisy boys visit often. She spent her free time spoiling her four grandsons and her six great-grandkids, playing golf, playing bridge, and working on P.E.O. projects. She was very proud of her “hole in one” in 1988. She loved cooking for all the holidays and hosting the “White Christmas Band” was her favorite. She retired from her realty business in 2016 at the age of 85. She moved to Enid Brookdale Assisted Living in October of 2018 to be closer to her daughter. She was preceeded in death by her parents and her beloved husband, Dr. Charles White. She is survived by daughters: Kay Kiner and husband, Dr. Larry, of Enid; Terry Steele and husband, David, of Wichita; grandchildren: Kyle and Jennie Kiner of Cherokee; Greg and Callie Kiner of Piedmont; Bryan and Abbie Steele of Maize, Ks.; and Michael Steele of Austin, Texas. Also she is survived by her six great grandchildren: Anna and Caleb Kiner of Cherokee, Noah and Lucy Kiner of Piedmont; and Xander and Juliet Steele of Maize, Ks. The family thanks for the loving care and memories by the Brookdale Assisted Living staff and the comfort from Hospice Circle of Love. Memorials can be made directly to NWOSU Foundation and First Christian Church through Wharton Funeral Home.

Patricia Ann Phillips was born in Wichita, Kansas, August 28, 1931. She was the only child of John and Irene Phillips. Soon after they moved to Wewoka, Oklahoma. She began piano and dance lessons at age 5 and continued thru high school. When... View Obituary & Service Information

The family of Patricia Ann White created this Life Tributes page to make it easy to share your memories.

Send flowers to the White family.