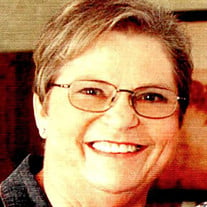 Patricia Ann Headlee, daughter of Faye (Benson) and Roy Hager, was born June 12, 1948, in Hardtner, Kansas. She passed away at home on April 18th at the age of 73 years, 10 months, and 6 days. As a child in Alva, Pat spent many happy days with her best friend Jean as well as her cousins Jerry, Janet, Violet, Bruce, and her brother Glenn. Her close-knit extended family was one of the lifelong joys of Pat’s life. After graduating from Woodward High School in 1966, Pat went on to attend NWOSU. She briefly taught school in San Antonio but returned to Alva in 1971. On December 31, 1971, she went out with a group of friends to ring in the new year. That evening she caught the eye of Steve Headlee. They ended up talking all night and watched the sun rise at the bluffs near Freedom. On June 23, 1972, they were married to this union two children were born, Chris and Lindsay. This June would have been their 50th wedding anniversary. Shortly after Chris was born, Pat started working at Central National Bank as a teller. She worked her way up to become the first woman to hold the title of loan officer at CNB. Eventually, she took over as the trust officer for the bank and held the title of executive vice president. She worked for the bank for 41 years before retiring in 2014. Along the way, Pat was an active member of Zion Lutheran Church, Rotary, and the NWOSU Alumni Association, but the happiest chapter of her life began in 2007 with the birth of her grandson Jaxon. She often said she couldn’t remember what she did with her spare time before Jaxon was born because being his grandma was so much fun. In 2012, her joy at being a grandmother was doubled with the birth of her second grandson Rylen. Many Friday nights were spent having family dinners followed by the boys spending the night at Grandma’s. As Jaxon and Rylen grew, her pride in their accomplishments in school and Boy Scouts knew no limits. Pat was preceded in death by her father Roy in 1988 and her mother Faye in 2006. She is survived by her husband Steve; her son Chris and his wife Melissa; her grandsons Jaxon and Rylen; her daughter Lindsay and her husband Daryl; and numerous nieces, nephews, cousins, and friends. In lieu of flowers, the family suggests that memorial donations be made in Pat’s name to the NWOSU Foundation or the Multiple Myeloma Research Foundation through Wharton Funeral Chapel

Patricia Ann Headlee, daughter of Faye (Benson) and Roy Hager, was born June 12, 1948, in Hardtner, Kansas. She passed away at home on April 18th at the age of 73 years, 10 months, and 6 days. As a child in Alva, Pat spent many happy days with... View Obituary & Service Information

The family of Patricia Ann Headlee created this Life Tributes page to make it easy to share your memories.

Send flowers to the Headlee family.