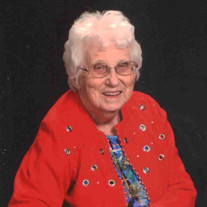 Neva Rosa (Gransbury) Polson, 92, passed away Wednesday, November 3, 2021 at the Share Convalescent Home in Alva, Oklahoma. She was born on March 16, 1929, on the farm east of Amorita, Oklahoma, to Lenard D. and Rosa (Wipft) Gransbury. Neva was the typical farm girl growing up with her older brother, Arthur. She rode horses, milked cows, fed pigs, chickens, and other daily chores. She graduated from Amorita High School in 1947. Neva was united in marriage to Dareus C. Polson on May 14, 1947, and they spent a couple of years in a small house southeast of Waldron, Kansas, before purchasing and moving to a farm north of Amorita. She was a homemaker and helpmate on the farm raising their two sons and daughter. In 1958, they started custom wheat harvesting traveling from Oklahoma to North Dakota. For the next 13 years, she prepared the trailer house and sleeper bus for the trek north as well as kept the crews fed and drove trucks all summer and fall. After she was no longer involved in the custom harvesting, she began working outside the home at the Kiowa Manor as a cook. She took classes to get her certification to be a dietician. She accepted a position as a dietician at the Cherokee Hospital and worked there until it closed. Then, she went to a dietician position at the Wakita Nursing Home where she retired in 1997. The Burlington 4-H and FFA organizations were an integral part of her life. She watched her own children participate in livestock shows and other activities and many times served as chaperone for groups of students. After her children graduated, she continued being involved in the organizations helping when she could. She loved watching her children and grandchildren play basketball, always keeping track of how many points or fouls each one made. After retirement, she enjoyed serving as a superintendent in the Homemaking Division at the Alfalfa County Fair and entering many items in various categories. Also, she enjoyed sewing and she made several large quilts for family members that were embroidered. Summertime had her heading to the plum thickets so she could make sand plum jelly for all her family and friends. She was active in the Jolly 20 Club, ABBD Senior Citizens Center, and planning the Amorita School Reunions. Her community was important to her and she loved to help when food was needed for a family, shower, or a funeral. In August 2015, she moved from the family farm to The Homestead in Alva where she gained a new group of friends and many activities to occupy her time. Neva passionately loved God and her family. She was a member of the Ebenzer Lutheran Church in Cherokee until it closed. She attended the Amorita Community Church until it closed and then she transferred to the Zion Lutheran Church in Alva. She developed close relationships with members of the Lutheran Church and so appreciated how they were always checking on her and offering rides to worship services. Neva was preceded in death by her parents and brother. She is survived by her two sons: Richard Polson and wife Leona of Alva, Robert Polson and wife Maxie of Midwest City, daughter: Rodeana Bixler and husband Stan of Waynoka; five grandchildren: Jeff Polson (Kelly), Blake Bixler (Chelsea), Clark Bixler (Bethany), Jerry Ryel, Janice Allen (Robert); 7 great-grandchildren and 5 great-great grandchildren. In lieu of flowers, memorial contributions can be made through the funeral home to the Byron Amorita Cemetery or the Zion Lutheran Church. Remembrances may be shared with the family at www.whartonfuneralchapel.com.

Neva Rosa (Gransbury) Polson, 92, passed away Wednesday, November 3, 2021 at the Share Convalescent Home in Alva, Oklahoma. She was born on March 16, 1929, on the farm east of Amorita, Oklahoma, to Lenard D. and Rosa (Wipft) Gransbury. Neva... View Obituary & Service Information

The family of Neva Rosa Polson created this Life Tributes page to make it easy to share your memories.

Send flowers to the Polson family.