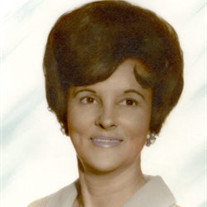 View the image gallery -- View a Video -- Devereaux Nellie Mae, daughter of Mary Elizabeth (Brown) and John D. Jones was born in Waynoka, Oklahoma on May 11, 1920. She passed away at the Yukon Integris Baptist Health Center on the 10th day of June at the age of 89 years and 30 days. She Graduated from the Highland Rural Grade School. Miss Jones was married to Lawrence Leroy Cunningham on September 4, 1938 in Alva. To their marriage three children, Margaret, Jackie and Janet were born. Following their marriage they lived in Alva, Enid and she then returned to Alva. Nell was married to Bernard Devereaux on December 23, 1961 in Alva, Oklahoma. Following their marriage they farmed west of Aline. In 1962 they came to Alva and opened the Devereaux Café on Oklahoma Boulevard. They then purchased and operated the Devereaux Locker and Butcher Plant until 1973 when they sold the plant. In June of 1987 they moved to Arkansas. She was a member of the Alva 1st United Methodist Church. Mrs. Devereaux was preceded in death by Leroy Cunningham, Bernard Devereaux, a step son, Ray Devereaux, her parents and two brothers, Howard as an infant and J.D. Jones. Nell is survived by her two daughters and their husbands, Margaret and John Ferguson of Owasso, Ok, and Janet and Ronnie Unruh of Yukon, Ok. A son and his wife, Jack and Mary Cunningham of Westfork, AR. Ten grandchildren, eighteen great grandchildren, two step grandchildren, five step great grandchildren, a brother and his wife Harold and Laura Jones of Alva; a sister in law, Elizabeth Jones of Cherokee. A special niece Brenda Jones Nusser and a special great niece Shelley Nusser Tatro; a number of nieces, nephews, other relatives and friends. PDF Printable Version

The family of Nellie Devereaux created this Life Tributes page to make it easy to share your memories.

Send flowers to the Devereaux family.