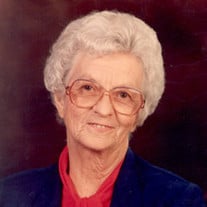 Nellie May Burnham, the oldest daughter of Earnest Gerald Smith and Clara Amy Woodard Smith, was born in a log cabin three miles north of Ringwood, Oklahoma, on April 4, 1926. She passed away on June 14, 2009 at the Share Convalescent Center, Alva Oklahoma. Nellie moved with her family to the Lookout community north west of Freedom in the 1930's. Nellie remembered the long trip to the Freedom area riding in a mule drawn wagon. Nellie's father worked on area farms, and he leased the Henderson place near the Centerview School where they farmed. It was here that Nellie met Warren Keith Burnham. They came to be good friends and on December 3, 1941 they were married at Cherokee, Oklahoma. They made their home farming in the Freedom area. There she had three children: Victor Keith, Eugene Lee and Rose Ann. They moved to Wichita in 1955, and then returned to the family farm in 1961. Nellie was an active partner in their farming and ranching operation. She would run a tractor, drive the wheat trucks, help with cattle, and get parts from town while keeping meals on the table and running the home. Nellie was an active member of the Freedom Baptist Church and active in church and community affairs. Nellie took up painting during the 1970's taking several classes and painting many western landscapes that she loved to show at local art shows. Nellie's door was always open to family and friends, who wanted to visit, needed a place to stay or a shoulder to cry on. She is preceded in death by her parents, Earnest and Clara, her husband Keith, her sister Amy Stewart and brothers Jack, Lee, and Marvin. She is survived by her children: Victor and friend Joyce Kelsey, Gene and his wife Margene, and Rose Ann; ten grandchildren: Rob Burnham and his wife Tonya, Kelly Burnham, Gina Schaaf and her husband Tony, and their mother Eva, and Laura Winklerbauer and her husband Wade; Sheldon Burnham, Samuel Burnham, Bret Burnham and his wife Tiffany, and JinYu Burnham; Bob Trissell, Sherry Agosti and her husband Jeff, and Jason Trissell and their father Jim Trissell; nine great grandchildren Kinzie and Jacey Schaaf, Wade Burnham, Annie Davis and Christopher Davis, Skylar and Jamaica Terrill; and Janelle and Sabrina Agosti; Nellie's sister Wanda Helton and Wanda's husband Ernie and sister-in-laws Norene Ritchie and Inez Hada; and many nieces and nephews, other relatives and friends. PDF Printable Version

Nellie May Burnham, the oldest daughter of Earnest Gerald Smith and Clara Amy Woodard Smith, was born in a log cabin three miles north of Ringwood, Oklahoma, on April 4, 1926. She passed away on June 14, 2009 at the Share Convalescent Center,... View Obituary & Service Information

The family of Nellie Burnham created this Life Tributes page to make it easy to share your memories.

Nellie May Burnham, the oldest daughter of Earnest Gerald Smith...

Send flowers to the Burnham family.