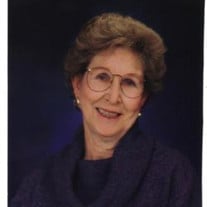 Mildred Simon Faires, retired educator, passed away on January 3, 2010 at her home in Broken Arrow. She was 90 years of age. “Mip” was born May 14, 1919 on a farm north of Alva to Clyde and Augusta (Kaminska) Simon. She attended Alva Public Schools, graduating from Alva High School in 1936. She graduated from Northwestern Oklahoma State University in Alva in 1940 with a Bachelor’s degree in English and biology and a Master’s degree in 1966 in elementary education. Her junior year was spent at the University of Oklahoma, where she also worked for Dr. George Cross, Dean of the Botany Department, who later became OU President. Her career as an educator began in Shattuck, Oklahoma during WWII. Upon returning to Alva, she began employment at Northwestern OSU as secretary to President Sabin Percefull, a position she resigned to marry her childhood sweetheart. Upon his return from WWII after serving five years overseas with the 45th Infantry Division, Mildred married Gene Faires on October 5, 1945 in the Alva Methodist Church. In 1947, they opened Faires Café on Oklahoma Boulevard. They later moved the café to the west side of the square. In 1967, she returned to education and taught 5th grade at Washington Elementary, the same school where her education began as a 5-year-old. She retired from teaching in 1981 and in 1999 was honored by the Oklahoma Retired Educators’ Association. When her health began declining in 2007, she moved to Broken Arrow to live with her son and daughter-in-law. Mildred was a member of Kappa Delta Pi and Delta Sigma Epsilon, the Alva Research Club and Chapter AL PEO, First Methodist Church, Holly Club, NEA, OEA, and Oklahoma Retired Teachers’ Association, and a former member of Alva Golf and Country Club. She enjoyed playing golf and bridge, needlework, reading and flower gardening. She spent her retirement years volunteering as a Pink Lady at Share Medical Center in Alva, Northwest Blood Institute in Enid, and serving on numerous election boards. In addition to her husband and parents, she was preceded in death by her brothers, Claude, Dean and Bill Simon; a sister, Jennie Huff; and an infant sister, Naomi Simon. Surviving to honor her memory are her daughter and son-in-law, Jane and Fred Campbell of Tulsa; two sons, John Faires of Alva; and Tom and his wife, Monte, of Broken Arrow; her grandchildren, Luke Faires of Cushing; Jeromey Gill and his wife, Kate, of Hoboken, New Jersey; Megan Alwood of Oklahoma City, and Lincoln Alwood of Broken Arrow; two great-grandchildren, Graysen Jane and Cooper Charles Gill of Hoboken, New Jersey; a niece, Mary Lou (Huff) Bianchi and her husband, Larry, of Scottsdale, Arizona; several other nieces and nephews; and special friend and caregiver, Joni Quinn, of Broken Arrow. PDF Printable Version

The family of Mildred Faires created this Life Tributes page to make it easy to share your memories.

Send flowers to the Faires family.