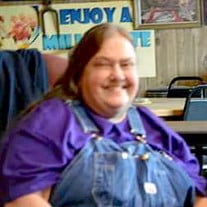 Michelle LaVerne was born on March 16, 1961 to Anna Rae (Joseph) McAlpin and Edward Allen McAlpin in Alva, Oklahoma. She passed away August 16, 2017 at St. Mary’s Regional Medical Center in Enid Ok. At the age of 56 years and 5 months. She attended Alva Schools, and graduated at Woodward High School in 1980 and had her son Michael John. Michelle worked at the Office Bar, painted houses, and hung sheetrock. She then in 1983 had her Daughter, Louree Dawn, and Continued working at the Byron Country Store & Sale Barn. She meet in 1990 her life Partner Albert Vogel and they moved to Kiowa, Kansas. She worked many jobs over the years including Plum Thickett Inn in Kiowa, Kansas and Yur Place in Hartdner, Kansas. In 1996 Albert and Michelle had Landon Albert. In 2010 Michelle opened a café in Nescatunga, Oklahoma, and then soon after Sug’s Anchor Inn Bar. Michelle is preceded in death by her parents, Anna Rae, and Edward, and nephew Marcus Huffmaster. Michelle is survived by her life partner Albert Vogel, her three children Michael John Scott, Louree Dawn Gordon, Landon Albert Vogel. Three grandchildren, Audrey Scott, Zachary Scott, Elijah Gordon. Her two full sisters Anna Marie Huffmaster and Yovonne Roysdon, Half sister Amy Allen, and half-brothers Jeff McAlpin and Matt McAlpin and their families. Contribution may be made to a Love Fund in care of Wharton Funeral Chapel. Family will be meeting after the service at Sug’s Anchor Inn for visitations.

Michelle LaVerne was born on March 16, 1961 to Anna Rae (Joseph) McAlpin and Edward Allen McAlpin in Alva, Oklahoma. She passed away August 16, 2017 at St. Mary&#8217;s Regional Medical Center in Enid Ok. At the age of 56 years and 5 months.... View Obituary & Service Information

The family of Michelle LaVerne White created this Life Tributes page to make it easy to share your memories.

Send flowers to the White family.