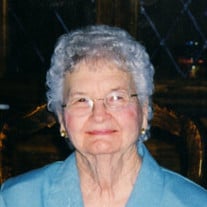 Merle Dean (Parker) Glasgow was born in Hobart, Oklahoma, on August 3, 1922, to Ocie Lela (Wood) and Isom Ewing Parker. She passed away at the Alva Share Medical Center the 17th day of January at the age of 87 years, 5 months and 14 days. Merle attended Hobart Elementary schools and graduated in 1940 from Hobart High. Miss Parker moved to Oklahoma City to attend Hills Business College. While living in the city she worked for Fretwell Motor Co. She met her future husband at the boarding house where they both lived at the time. On April 2nd, 1941, Robert E. Glasgow from Dacoma, and Merle Dean were married in the Oklahoma City Shartel Church of God. To their marriage three daughters, Dana, Colleen and Kelli were born. Their marriage lasted 55 years until Mr. Glasgow’s death on April 13, 1996. After their marriage, the two moved to Hardtner, Kansas, where Robert worked as business manager of the Achenbach Memorial Hospital. In 1943 Robert worked for Cessna, moving the family to Wichita, and later to Mid West City where he worked at Tinker Air Force Base for the U.S. Air Force Civil Service, flight-testing aircraft for the war. In 1945, the couple moved to Dacoma where Merle Dean worked along side Robert in Glasgow’s IGA Grocery, which they owned and ran until 1950 when they moved to Alva. Robert was the Alva General Hospital Administrator for the next ten years while Merle Dean was a homemaker and mother to their three daughters. They then spent 19 years in Woodward where Robert was the Administrator for the Woodward Memorial Hospital. In 1979, the couple returned to Alva to retire. Mrs. Glasgow joined the Eastern Star in 1945, was on the Alva Hospital Bowling League, a member of the Woodwardettes Home Extension Club and always active in her church. She was a member of the Alva Church of God where she was a substitute Sunday school teacher. She also loved to cook and sew for her family. Her church and strong faith were very important throughout her life. She enjoyed listening to tapes of sermons after she no longer could attend in person. Mrs. Glasgow was preceded in death by her parents, her sister, Phebe Barrow, a sister-in-law, Dana M. Glasgow, a nephew, Kim Ratzlaff and her husband, Robert. Merle Dean is survived by her daughters and their husbands; Dana and Robert Hooper, Colleen and Leo Myers, and Kelli and Jarek Kelnar; two grandchildren, Natalie and Phillip Myers; a sister-in-law and her husband, Margaret and Clifford Ratzlaff; three nephews, Larry and Randy Ratzlaff and Mike Barrow, as well as two nieces, Diana Glasgow and Lynn Munson and numerous friends and extended family. Memorial contributions can be made in her name to the Alva Church of God. PDF Printable Version

Merle Dean (Parker) Glasgow was born in Hobart, Oklahoma, on August 3, 1922, to Ocie Lela (Wood) and Isom Ewing Parker. She passed away at the Alva Share Medical Center the 17th day of January at the age of 87 years, 5 months and 14 days. Merle... View Obituary & Service Information

The family of Merle Dean Glasgow created this Life Tributes page to make it easy to share your memories.

Merle Dean (Parker) Glasgow was born in Hobart, Oklahoma, on...

Send flowers to the Glasgow family.