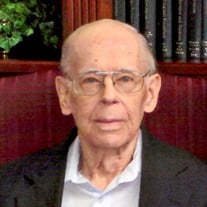 Melvin Leon, son of Mary Pricilla (Heady) and Floyd Monroe Cline was born on March 5, 1921 in Dacoma, Oklahoma. He passed away at his son’s home in Oklahoma City on the 28th of August at the age of 88 years, 5 months and 23 days. He attended the Red Bird Rural Grade School, graduated from Dacoma High School and attended Northwestern State College for three years. He was a veteran of WWII serving in the U.S. Army for four years and in the European Theater for two years. Leon was married to Carol Eileen German on August 2, 1943 at Muskogee, Oklahoma. To their marriage two children, Leigh Anne and David were born. Following their marriage they made their home in Alva and later moved to Woodward where he was manager of the Hackett Auto Supply for many years. They returned Alva in 1974. Mr. Cline was a member of the Alva Church of God and served on the church board for a number of years. He was preceded in death by his parents and a brother, Marvin. Leon is survived by his wife, Carol of the home, a daughter and her husband, Leigh Anne and Roger Nobis of Alva, a son and his wife, David and Christy of Oklahoma City. Four Grandchildren, Lori and Nicholas Huber, Lisa and Brock Minnick, Steven Nobis, Tony Cline and Rose Brocks and her children, Jenny, Chris and Michael, a great grandson, Alexx Minnick. Four cousins, Elma Lou Goforth, Charlene Bovinett, Linda Osborn, Linda Lee and Frank Pestana, other relatives and friends. PDF Printable Version

Melvin Leon, son of Mary Pricilla (Heady) and Floyd Monroe Cline was born on March 5, 1921 in Dacoma, Oklahoma. He passed away at his son&#8217;s home in Oklahoma City on the 28th of August at the age of 88 years, 5 months and 23 days. He... View Obituary & Service Information

The family of Melvin Leon Cline created this Life Tributes page to make it easy to share your memories.

Send flowers to the Cline family.