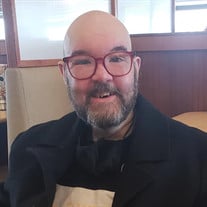 Matthew Nicholas, son of, Kay and Jim Hoffman and Vern Loftus, was born March 14, 1983 in Wichita, Kansas. This beautiful boy ran into his Lord’s open arms on January 14, 2022 at the age of 38 years, and 10 months. Matthew was a blessing to everyone he met. Their lives were enriched by knowing him. He attended school in Riverside, California, Hardtner, Kansas and graduated from Skyline High School in Pratt, Kansas. After graduation Matthew began working for Taco Bell where he retired after 18 years of dedicated service. He loved spending time with his family and friends, watching and collecting movies. He has a collection of over 500 movies and could name them all. You could ask him anything about a movie and he would know the answer. Matthew lived his life to glorify God. He never complained about anything he had to endure in his life. He faced everything with an amazing smile, knowing the Lord was walking through it with him. His life was an encouragement to so many. He had a very kind and compassionate heart. He was preceded in death by his Dad, James Hoffman; his Grandparents and an Uncle, Frank Shira. Matty is survived by his Mom, Kay and her husband Ed; his Father, Vern Loftus; three Sisters, Tabetha Lewis and her husband Scott, Amy Loftus, Sarah Brack and her husband Landon. He is also survived by two adopted Sisters, Ammie Buck and Shelly Fisher; six Nephews, four Nieces; many Aunts, Uncles, other relatives and friends. Matty also leaves behind his beloved dog, Davey.

The family of Matthew Loftus-Hoffman created this Life Tributes page to make it easy to share your memories.

Send flowers to the Loftus-Hoffman family.