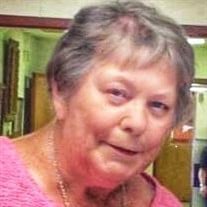 Maryona Marie was born July 14, 1937 to Arloa (Webb) and Glenn (Bud) Cushenbery in Kiowa, Ks. She passed away March 4, 2019 at Share Convalescent Home at the age of 81 years, 7 months, and 20 days. Maryona loved it when her sisters and brothers, Glenna, Elisha, Harold, Eddie and Sanza called her “Sissie”. Her sister Glenna remembers her always wearing a dress and frequently reading. She graduated from Alva High School in 1955. After graduating, Maryona went to Wichita, Ks. where she attended flight attendant school. She made a life-long friend there, Peggy. They kept in touch until Peggy’s passing. On October 31, 1959 Maryona was united in marriage to Leland Morris in Alva, Ok. Following their marriage they made their home in the Capron and Alva areas. They adopted their daughter Kathy Lynee who was born January 18, 1971. They adopted their second child, a son, Chris Alan who was born July 16, 1974. The family moved to Alva when the kids started school and resided there until her death. Maryona helped Leland and Chris with the farm until they sold the farm in 2006. In her younger years, Maryona worked for her dad at Cush’s Corner and always had a lot of fun stories about her adventures there. She was a waitress at many café’s around Alva and loved the people she met. Maryona worked as a switchboard operator for Southwestern Bell in Alva and also worked in the office at Share Medical Center. Maryona began working at Wal-Mart from 1990 until she retired in 2007. She loved Wal-Mart and all of the people she got to see and talk to every day. It wasn’t just a job for her, it was her home. Maryona greatly enjoyed attending the Cedar Grove Church Ladies Quilting Club in Hardtner, Ks. until she was unable to get out any longer. She also enjoyed the breakfast meetings with the ladies each week. She and her sister and best friend, Glenna, saw each other almost daily for a cold drink and some sister time. She loved visits from her children and family and enjoyed attending any of her grandchildren’s activities. Maryona loved her siblings and always had a lot of stories to share, as she was the oldest. Maryona was preceded in death by her husband Leland, her parents, Glenn (Bud) and Arloa Cushenbery, and an infant sister, Peggy Cushenbery. She is survived by her daughter and son in law, Kathy and Quentin Reynolds of Gillette, Wyoming, her son and daughter in law, Chris and Shannon Morris of Alva, Maryona will be dearly missed by her four grandchildren, Quincy Reynolds (18), Mackenzie Morris (15), Kashton Reynolds (14), and Mitchell Morris (13). two sisters, Glenna (Terry) Ewing of Alva, Sanza (Dave) Grant of Hardtner, Ks., three brothers, Elisha (Judy) Cushenbery of Athens, Tx., Harold (Ann (Vernie)) Cushenbery of Alva, Eddie (LaDonna) Cushenbery of Alva, and many other relatives and friends. Memorial Contributions are made out to Bank It (Alva Library Youth Activities)

Maryona Marie was born July 14, 1937 to Arloa (Webb) and Glenn (Bud) Cushenbery in Kiowa, Ks. She passed away March 4, 2019 at Share Convalescent Home at the age of 81 years, 7 months, and 20 days. Maryona loved it when her sisters and brothers,... View Obituary & Service Information

The family of Maryona Marie Morris created this Life Tributes page to make it easy to share your memories.

Send flowers to the Morris family.