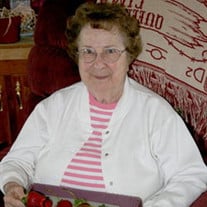 Mary Margaret was born to Myrtle Luella Baker & Luther Raymond Hicks on March 3, 1919 in Keokuk, IA and died Feb.19, 2013 at Share Medical Center in Alva, OK. She was 93. She was cremated and no service is planned, at her request. Her schooling was in Oregon, MO graduating from High School in 1936. She then went to CA to live with her loving Aunt Veda where she worked & met H. Dudley Winn in 1939. They secretly eloped to Yuma, CA March 16, 1940 & had a second ‘formal’ wedding with family in attendance on Oct. 26, 1940 in San Diego, CA. Dudley was a PFC in the Army stationed in San Antonio, TX then in Neosho, MO. While in San Antonio, Mary Margaret worked in the Officers Retirement Section interviewing retiring officers. Dudley was discharged from the Army June 15, 1946. Upon return home he was greeted by a baby boy, H. Dudley II, born June 28, 1946. After Jeffery Lawrence was born August 20, 1953, they moved to their home at 1820 Euclid in El Cajon, CA. They resided there until 1974 when they moved to 450 E. Bradley #131. In 1968 Mary Margaret went to work for the El Cajon Valley High School Principals office until she retired in March of 1985. In 1980 her mother, Myrtle, came to live with the family after losing her second husband. Dudley retired from his Optometry profession in 1986. He died Oct. 25, 1994. He was cremated & his ashes are on the wall at Fort Rosecrans, CA. In Dec, 2007 after suffering a stroke, she came to Alva, OK to share the home of her son, Dudley & Jeanne Winn. She had lived at Beadles Nursing Home since Dec 2012. Mary is survived by her two sons & their wives, Dudley & Jeanne of Alva, OK; Jeff & Carol of San Jose, CA; grand daughters Danielle Hankins & Heather Summers of McKinney, TX; Caitlin Winn of Forbestown, CA & Chloe Winn of San Jose, CA; step grandsons Vaughn Rader of Alva, Darrin Rader of Tuttle, OK & Dale Rader of Alva; eight great grandchildren and many friends and family. PDF Printable Version

Mary Margaret was born to Myrtle Luella Baker & Luther Raymond Hicks on March 3, 1919 in Keokuk, IA and died Feb.19, 2013 at Share Medical Center in Alva, OK. She was 93. She was cremated and no service is planned, at her request. Her schooling... View Obituary & Service Information

The family of Mary Margaret Winn created this Life Tributes page to make it easy to share your memories.