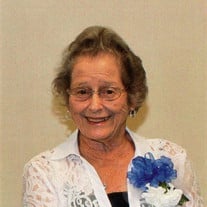 Mary Jean was born February 28, 1934 at the farm southwest of Hopeton, the seventh child of nine to Ada (Morse) and Charles Nusser. On January 24, 2017 Mary ascended to heaven to be with Jesus, at the age of 82 yrs, 10 months, 26 days. She attended Friendship grade School and Dacoma High School. On May 21, 1951 she married Clifford Johnson at the Alva Christian Church officiated by Rev. Hudson. To their marriage four children were born; Carol Elaine, Bruce Lynn, Peggy Sue and Craig Lee. Mary worked hand in hand with Clifford on the farm in the Dacoma area. She worked at Tanner's Clothing and Gards Jewelry Store. For a number of years they were lay speakers in the Methodist Church and had the honor to assist in the Home fellowship ministries. Mary was a member of the Alva Wesleyan Church. She was preceded in death by her parents, two sisters, three brothers and an infant daughter, Peggy Sue and one son-in-law, Charles O'Neil. Mary is survived by husband Clifford of Dacoma, daughter Carol O’Neil of Carmen, sons; Bruce and wife Brenda of Smithville, MO, Craig and wife Janean of Dacoma. Grandkids are Brandy O’Neil and wife Christyn of Aline, OK; Ryan O’Neil and wife Donna of Collinsville, OK; Cole O’Neil and wife Bridget of Medford, OK; Devin O’Neil and wife Julie of Duncan, OK; Connie Couch and husband Conor of Liberty MO; Erica Leslie and husband, Grant of Lees Summit, MO; Cade Johnson and wife Taylor of Alva, OK, Wyatt and Trevor Johnson of Dacoma, OK. and eleven great grandkids. Three brothers and wives; Dean and Patty Nusser, Alan and Leota Nusser, Charles and Judy Nusser, a sister-in-law, Neleda Murrow and many other relatives and friends. Contributions may be made to the Alva Wesleyan Peru Missions, through Wharton funeral Chapel

Mary Jean was born February 28, 1934 at the farm southwest of Hopeton, the seventh child of nine to Ada (Morse) and Charles Nusser. On January 24, 2017 Mary ascended to heaven to be with Jesus, at the age of 82 yrs, 10 months, 26 days. She... View Obituary & Service Information

The family of Mary J. Johnson created this Life Tributes page to make it easy to share your memories.

Send flowers to the Johnson family.