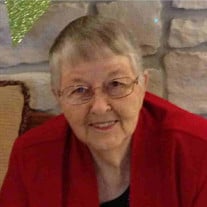 Mary was born to Mary (Gerrels) and Ado Wessels on February 2, 1921 in Cherokee, Oklahoma, and was the fifth of eight children. She peacefully departed this life on November 20, 2019, at the age of 98 years, 9 months and 18 days. She attended the Locust Grove District 45 Primary School and graduated from Cherokee High School with the class of 1938. Upon her graduation, she attended Northwestern State College to study business administration. It was during her years at Northwestern that she met her husband, Jack Leon Erskine. Jack and Mary were married on August 6, 1940 and made their home in Alva for more than 60 years before relocating to Lake Jackson, Texas to be closer to their children and grandchildren. Mary was a member of the First Presbyterian Church of Alva for 75 years and was a person of deep Christian faith. She was active member and an Elder of her church, having held all offices in Presbyterian Woman, directed children’s Sunday School and choirs as well as being a member of the Chancel Choir for 60 years. Mary also served as the church secretary for more than 20 years. When Mary was not raising her family or helping her church, she could often be found doing various art projects, or more likely, at a research table working on genealogy. Mary was an avid genealogist and was at the forefront of the area’s Genealogical Society events and projects as a charter member of the Alva Centennial Commission from 1973-1993 and the Cherokee Strip Volunteer League. During this time Mary helped research, author and publish numerous genealogy books. She also organized and was the Journal Editor for the Woods County Genealogist for 17 years. Mary, along with her friend, Mildred Hager, published Woods county Territory Days 1803-1907 for which she was honored with the 1972 Distinguished Service Award by the Oklahoma Heritage Association. As successful as Mary’s professional life was, family was paramount in her life and she looked upon them as her greatest treasures and accomplishments. She was preceded in death by her parents, her seven siblings, her husband, Jack Leon Erskine and her granddaughter Leslie Erskine Huye, PhD. Mary is survived by her two devoted sons, James Spencer Erskine and John K. Erskine and wife, Pat (Morehart) Erskine of Lake Jackson, TX, granddaughter Marsha Lyn Erskine of The Woodlands, TX, Steven Joseph Huye, and great-grandchildren Joshua Scott Huye and Lauren Michelle Huye all of Missouri City, TX. In lieu of flowers, Mary requested that memorials be made to The Alva First Presbyterian Church or the Alva Public Library. Through Wharton Funeral Chapel 1302 Oklahoma Blvd. Alva, OK 73717 580-327-1234

Mary was born to Mary (Gerrels) and Ado Wessels on February 2, 1921 in Cherokee, Oklahoma, and was the fifth of eight children. She peacefully departed this life on November 20, 2019, at the age of 98 years, 9 months and 18 days. She attended... View Obituary & Service Information

The family of Mary Erskine created this Life Tributes page to make it easy to share your memories.

Mary was born to Mary (Gerrels) and Ado Wessels on February 2,...

Send flowers to the Erskine family.