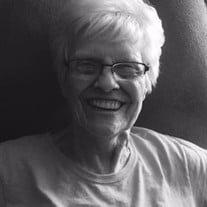 Memorial Service: Wharton Funeral Chapel, Monday, January 11, 2016 at 2:00 P.M. Mary Kay was born to Josephine (Ladd) and Lyle Swift in Delphos, OH on September 6, 1941, and passed away January 5, 2016 at Saint Anthonys Hospital in Oklahoma City, OK and was surrounded by her loved ones. Kay attended school at St Johns Catholic School in Delphos, OH and later attended school at Findlay, OH. She was married to Bernard Burton in 1960 and they had two sons Jobi Paul and Michael Dean. On July 1, 1965 she was married to Charles Weston Corder in Pampa, TX to this union were two sons Douglas Franklin and Jason Lyle. Mrs. Corder worked at the Ideal Food Stores in Shattuck, OK and Alva, OK. Kay was later self employed and worked for many people in the Alva area. Kay was a devoted wife, mother, grandmother and great-grandmother. She loved spending time with her family, especially her grandchildren. She had a love for music and in 2015 got to see her favorite band "The Eagles". She also loved to watch OU Sooners football. Over the years she collected OU knick-knacks and would "bring them out" to prepare for the weekly game. She always had a smile on her face and had an infectious laugh. Kay was loved by all and will be missed by all. Kay is survived by her sons; Michael Dean and wife Penny, Douglas Franklin and wife Sharon, and Jason Lyle and wife Ashley, 11 grandchildren and 10 great grandchildren. Also surviving are sisters Sandra and Shirley, cousins, nieces and nephews. She is preceded in death by her husband, mother, father, a son Jobi Paul, two infant grandchildren and brothers Chuck and Richard.

The family of Mary Kay Corder created this Life Tributes page to make it easy to share your memories.

Send flowers to the Corder family.