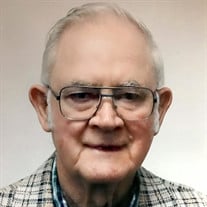 Marvin Clarence Pshigoda was born February 3, 1931 in Shattuck, OK to John Daniel and Mary (Schaefer) Pshigoda Ginder. He passed away suddenly at Share Medical Center in Alva on January 14, 2020 at the age of 88 years, 11 months, and 14 days. Services will be held on Saturday, January 18, 2020 at 2:00 p.m. at The College Hill Church of Christ, 1102 College Boulevard, Alva, OK. Visitation is on Friday, January 17, 2020 at Wharton Funeral Chapel from 6:00 p.m. to 7:30 p.m. At a young age, the family moved to a farm northeast of Alva, OK. Since he was 12, he started driving a tractor. At that time, he was the oldest son living on the farm with three siblings younger than him and the three oldest siblings were out of the home. When his father died, Marvin was 15, and the family moved into Alva where he attended Alva Public Schools. At the age of 17, he enlisted in the United States Air Force in May of 1948 for a three year enlistment. He did his basics at Lackland Air Force Base in San Antonio, TX signing up for weather training taking him to Tinker AFB in Oklahoma City. He then went to two air force bases for advanced weather schooling in Illinois and California. He was trained in Rawinsonde training for weather balloons and Dropsonde for dropping weather instruments from aircrafts. Marvin was then assigned to Eielson AFB near Fairbanks, Alaska with the 375th Weather Reconnaissance Squadron. During his time in Alaska, the Korean War broke out and the air force added an additional year to his enlistment. Because of the training his squadron had received, they were not allowed to go to Korea, but had to stay in Alaska to test air for any signs of chemical warfare and continue with weather prediction. Marvin was honorably discharged in May of 1952. He was proudly a live-time member of the Veterans of Foreign Wars (VFW) and the American Legion. After discharge, Marvin returned to Alva working for local farmers and did custom cutting. This is where he met and married Margaret Leah Lakely. To this marriage a daughter was born, Mardonna Gail. Marvin worked for a local farmer, Bill Diacon, for 21 years. After Bill’s passing, he worked for Adair Brown in Pratt, Kansas for five years. They moved back to Alva in 1980. In 1983, he worked for Kiowa Service (a John Deere dealership) in Kiowa, KS hauling combines to Canada, Texas, California, Washington state, and Moline, Il. During the off-season, he was a mechanic, servicing and repairing equipment for 21 years until they closed. After that time, he did miscellaneous jobs for area farmers and a part-time job at Sams’ Monument. Lately he worked at the Alva Review-Courier to help put out the Newsgram. Marvin was a jack-of-all trades, being able to fix and repair anything. He loved growing and sharing his garden produce with everyone. There wasn’t anything he and Marge couldn’t grow. He loved his grandchildren and great-grandchildren which were very special to him and attended many of their events. He was baptized in the Baptist Church at a young age in Alva, OK and has attended the College Hill Church of Christ faithfully. Marvin is preceded in death by his parents, his wife, Margaret, two brothers, Dan and Ted Pshigoda, and two sisters, Esther Colborn Balding and Mary Driskill Smith. Marvin is survived by his daughter and her husband, Mardonna and Steve Brady, two grandchildren, Leah Brady and friend Chris Dunn and his son Jace Dunn, Landon Brady and wife Angelica, three great-grandchildren, Drake, Deacon, and Avery Brady, a special and dear friend Roma Scott, two sisters, Frieda Graves and Ofilia Cleveland. Also at home, is his special and faithful house dog for 16 years, Buddy.

Marvin Clarence Pshigoda was born February 3, 1931 in Shattuck, OK to John Daniel and Mary (Schaefer) Pshigoda Ginder. He passed away suddenly at Share Medical Center in Alva on January 14, 2020 at the age of 88 years, 11 months, and 14 days.... View Obituary & Service Information

The family of Marvin Clarence Pshigoda created this Life Tributes page to make it easy to share your memories.

Send flowers to the Pshigoda family.