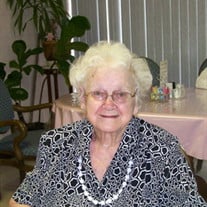 Marvel Louise was born September 24, 1920 the fifth child in a family of eight children of Harry and Susie (Conway) Parker near Avard, Oklahoma. She passed away at the Golden Age Nursing Home in Guthrie, Oklahoma on the 26th day of January at the age of 92 years, 4 months and 2 days. She grew up on a farm two and one half miles east of Avard. She attended grade school at Avard except for one year at Antelope rural grade school and went to high school at Avard graduating in 1938. She attended the Avard Christian Church and was active in 4-H club at Avard. On August 9, 1939, she was married to Dean Gerald Bixler at the First Christian Church in Alva. To their marriage two children Nancy and Lee were born. Shortly after celebrating their 70th Wedding Anniversary, Dean passed away on November 3, 2009. A few years after their marriage they were able to purchase a farm from John Francis who wanted to retire and move to Waynoka. The farm they purchased had been homesteaded by Charles B. Byxbee who in March 1906 received a land patent from Theodore Roosevelt. They lived in this early day farm house for twenty one years and then built a new house in 1964 which they still own. Marvel was a member of the Rose Valley Home Demonstration Club serving in all of the offices while a member. She managed the Rose Valley School Lunch program for several years. She also worked in the Dietary Dept. of the Waynoka Nursing home serving as manager for many years. Over the years she was active in many areas of the church. She especially enjoyed the women’s fellowship group, W.O.L.F. and attending V.B.S. for seniors. Mrs. Bixler was preceded in death by her parents; a sister, Esther Reiman; four brothers, John Parker, Harold Parker, Robert Parker and Raymond Parker. Marvel is survived by a daughter, Nancy Bixler of San Antonio, Texas; a son Lee and his wife Lyndia of Edmond, Oklahoma; three grandchildren and their spouses, Todd and Josephine of Los Angeles, California, Traci and Joe Kreger of Edmond, Oklahoma, and Tim Bixler of Copper Mountain, Colorado; four great grandchildren, Caroline and Landon Kreger of Edmond and Madeline and Dean Bixler of Los Angeles, California. A sister, Patsy and her husband Bob Wharton of Alva, a brother and his wife Virgil and Lydia Parker of Avard and a number of nieces, nephews, other relatives and friends. PDF Printable Version

Marvel Louise was born September 24, 1920 the fifth child in a family of eight children of Harry and Susie (Conway) Parker near Avard, Oklahoma. She passed away at the Golden Age Nursing Home in Guthrie, Oklahoma on the 26th day of January at... View Obituary & Service Information

The family of Marvel L Bixler created this Life Tributes page to make it easy to share your memories.

Send flowers to the Bixler family.