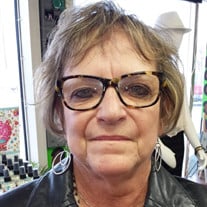 Martha Mildred, was born April 23,1949 in Nashville, Kanas to Virginia (Meng) and Francis Hrencher. She passed from this life on Wednesday, March 30, 2022 in Oklahoma City, OK. She passed from complications of pneumonia, kidney disease, high blood pressure and diabetes. She was the third of nine siblings. She attended school in Sharon, Kansas and graduated high school in 1967. After graduation, she attended Brown Mackie College and received an associate degree. She married Kent Gardner on January, 29,1972 in Sharon. They made their home in Wichita, KS. During this time, they welcomed Clint on August 10, 1972 and Kimberly on January 26, 1975. In 1976, Kent and Martha moved their family to Alva which became their forever home. Martha worked 20 plus years as the office manager for Ed Hodgden Construction Company. After Ed retired, Martha began working as the District 1 secretary for Woods County. Martha enjoyed working with all “those boys” at the county shed. She made many memories during her time there. Martha retired 2015. During retirement, Martha enjoyed spending time with Kent, friends, family, and fishing. She couldn’t pass up a good garage sale and enjoyed many weekend garage sale trips with her sisters. Martha also enjoyed having coffee at Holders with “the girls”. She was preceded in death by her parents and in-laws, one brother Joe and one infant sister Philomena. Martha is survived by her husband of 50 years, Kent of Alva; son Clint and wife Deborah of Pryor Oklahoma; daughter Kim Goucher and husband Mike of Waynoka Oklahoma. Also surviving four grandchildren, Kara Gardner of Wichita Kansas, Kolby Gann and wife Destinee of Enid, Oklahoma, Addison Gann of Hardtner Kansas, Tanner Gardner of Pryor Oklahoma; four great-grandchildren Aira, Mia, Bentlee and Waylon. Contributions to Sacred Heart Altar Society Through Wharton Funeral Chapel

Martha Mildred, was born April 23,1949 in Nashville, Kanas to Virginia (Meng) and Francis Hrencher. She passed from this life on Wednesday, March 30, 2022 in Oklahoma City, OK. She passed from complications of pneumonia, kidney disease, high... View Obituary & Service Information

The family of Martha Mildred Gardner created this Life Tributes page to make it easy to share your memories.

Send flowers to the Gardner family.