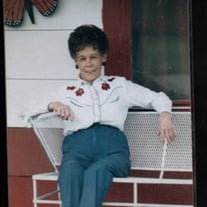 Marie Elaine, Daughter of Mable (Webster) and John R. McDowell, was born on January 3, 1919 on the farm near Byron, Oklahoma, one of twin girls born that day. She passed away on June 23 at the Arbor House in Mustang, Oklahoma at the Age of 93 years, 5 months, and 20 days. Miss McDowell attended the Cleo Springs school system. On November 30, 1937 in Enid, Oklahoma she married Dan Wilcox to their marriage four children were born and two grandchildren were adopted. Following their marriage they lived northwest of Cleo Springs. In 1958 the family moved to Alva where Marie worked at the Steak House, Marlene’s and later Beeler’s Restaurant V.I.P. as a waitress. She also worked as a maid at Wharton’s Vista Motel. Marie loved animals of all kinds; she raised chickens, bunnies and a few peacocks. During the 1970’s Dan and Marie purchased 15 acres north of Alva where she raised a large garden of vegetables along with a horse, a few pigs and many cats and cows. She was in her late 80’s when she no longer could take care of her beloved animals. Marie met David McElveen while working at the V.I.P. The couple was married September 19, 1981. After their marriage she took care of two of David’s teenage sons. Throughout her life Marie cared for her children in many ways. She was an excellent seamstress and made most of her children’s clothes. She canned vegetables from her garden for winter time and also made many quilts to keep her family warm. Marie attended the Nazarene Church of Alva were she was saved. Marie was preceded in Death by her parents, three brothers, 2 sisters, a daughter, Marlene Wilcox, and two husbands, Dan Wilcox and David McElveen. Marie is survived by two sons and their wives, Rodney and Karen of Enid and Keith and Sina of Burns, Kansas, three daughters, Marjorie and Richard Sacket of Yukon, Coletta and Alan Wharton of Alva and Eyvette and Larry Herman of Hugoton, Kansas. A number of grand children, great grandchildren and great great grandchildren and many nieces, nephews, other relatives and friends. PDF Printable Version

Marie Elaine, Daughter of Mable (Webster) and John R. McDowell, was born on January 3, 1919 on the farm near Byron, Oklahoma, one of twin girls born that day. She passed away on June 23 at the Arbor House in Mustang, Oklahoma at the Age of 93... View Obituary & Service Information

The family of Marie Elaine McElveen created this Life Tributes page to make it easy to share your memories.