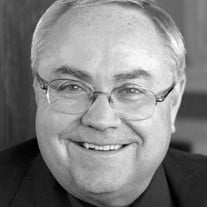 Lynn Luther Martin, 77, departed this life on March 12, 2019, in Alva. The memorial service will be at 10 a.m. Saturday, March 16, in the Alva High School Auditorium with Dr. W. Jay Tyree officiating. Wharton Funeral Chapel is in charge of arrangements. He was cremated and interment will be at a later date at the Alva Municipal Cemetery. He was born September 11, 1941, in Springfield, Missouri, to Luther Washburn Martin and Jeanne Frances (Reynolds) Martin. As a small child, Lynn moved with his parents to Cedartown, Georgia. In August 1947, they made their home in Rolla, Missouri, where his father and partners put KTTR-AM on the air. He graduated from Rolla High School in 1959, attended the Missouri School of Mines (now Missouri University of Science and Technology) in Rolla and the University of Missouri at Columbia before earning a BA in psychology from Northwestern Oklahoma State University in Alva. As a young teen, Lynn began his entrepreneurial career distilling water and selling it to neighborhood customers for use in their steam irons. His Grandmother Martin helped him purchase his first camera, and he worked as a freelance photographer for a local newspaper while still in high school. He began his radio broadcasting career in high school as a deejay on KTTR-AM and also climbed the radio tower to replace lights. Lynn married Marione Elaine Derrickson on February 1, 1963, in Licking, Missouri. They made their home in Rolla where Lynn was news director at KTTR-AM. They moved to Alva in December 1968 after purchasing KALV-AM which they operated until it was sold in 1988. They began the Newsgram free publication about 1971, and it grew from a half sheet of headlines at restaurants into a publication now circulated weekly to everyone in three counties. On April 1, 1990, they bought the Alva-Review-Courier. Lynn continued his interest in photography, purchasing a studio in Alva which he operated until his illness. He always said he never intended to retire. Lynn was a member of the College Hill Church of Christ in Alva and led songs for their Sunday morning service at Bill Johnson Correctional Center. He was a longtime member of the Alva Kiwanis Club where he served in many capacities including president and a member of the BJCC advisory board. He was preceded in death by his parents, a brother Kurt Reynolds Martin and a sister Marta Ann Martin Ward. Lynn is survived by Marione, his wife of 56 years; a daughter, Marisa Dye and her husband Darrel of Ponca City; seven grandchildren, Katherine Lunn and husband Trey of Alva, Jolie Kuhlmann of Torrington, Connecticut, Kaitlyn Dye, Jessica Dye, Whitney Dye, Luther Kuhlmann and Addie Dye, all of Ponca City; one great-granddaughter Gabriella (Brie) Lunn; two sisters, Judy Jeanne Martin Doering and her husband Harlan of Tyler, Texas, and Tara Lee Martin Calhoun of Norman; and many other relatives and friends. Memorial contributions may be made to the Church of Christ Bible Chair in Alva or the Northwestern Oklahoma State University Foundation through Wharton funeral Chapel.

Lynn Luther Martin, 77, departed this life on March 12, 2019, in Alva. The memorial service will be at 10 a.m. Saturday, March 16, in the Alva High School Auditorium with Dr. W. Jay Tyree officiating. Wharton Funeral Chapel is in charge of arrangements.... View Obituary & Service Information

The family of Lynn L Martin created this Life Tributes page to make it easy to share your memories.

Send flowers to the Martin family.